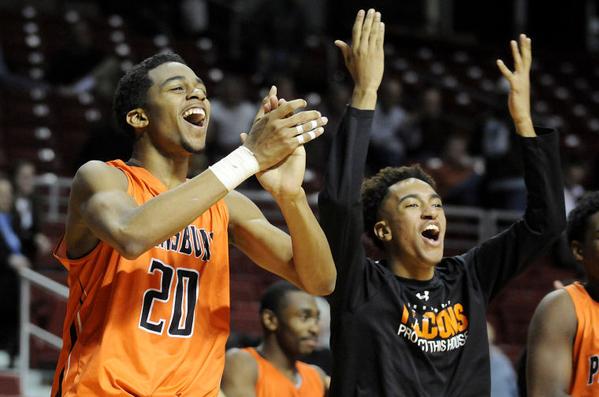 Woods is the second new Bonnie this week. That is not a typo.

The Bonnies landed their second recruit of the fall period tonight when Derrick Woods, a string bean/athletic freak forward from outside of Philly (kinda) agreed to wear the Brown and White next year. No this is not a typo. The staff signed TWO players in the fall period. I think they mostly did it to shut up people who bitched about them never landing anyone in the early period. Are you happy now?

Now, I would think Schmidt will next turn his attention to landing an immediate impact JUCO center. They need someone who can step in and play down low next year. While Woods and Griffin look like high upside guys, I’m not sure either are ready to play down low 28 minutes a night in a top six conference in basketball next season. Think D’lancy Carter…just better. No offense to Big D, he was a former room mate of mine and a great kid. But this is 2014 and not 2008, times have changed and when the Bonnies go food shopping now they’re in the poultry/meats isle not the frozen foods section. Which says a lot because under Solomon we were shopping at Aldi with an access card…

Anyway, early indications point to Woods being a bit of a project, a kid whose just starting to figure out how to play at a high level. He’s obviously long as hell, needs to put on muscle and improve in just about everything if he wants to become a credible A10 big man. But this is the type of kid Schmidt loves to sign: one a with a super high ceiling. If he pans out (and hopefully he will under SBU  since we’ve developed bigs with some success under Mark) he could be a really good player…the kind we need to gamble on because if he’s far more polished now he’s signing with Villanova or Saint John’s and not Bonaventure. Between Woods and Griffin the Bonnies landed some potentially freak athlete wings with major upside…maybe like a Raphiel Putney of UMass? From my mouth to God’s ears…

Here are some reactions/links from the great world of twitter on Woods’ decision to come to the Enchanted Mountains.

@Ianrnolan …and post game. Can play above the rim, solid shot blocker. Could be realllly good in his upperclass years. Still has work

@Ianrnolan still sort of raw but starting to come into his frame. Very long and rangy, pretty good athlete. Has improved mid range…