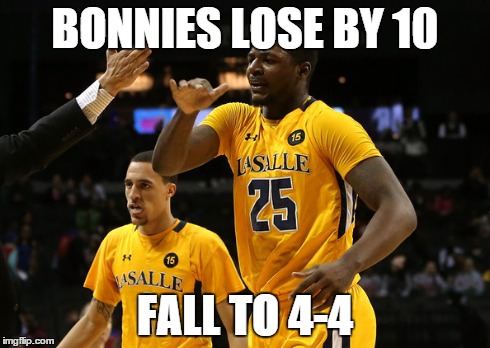 The Bonnies produced a whole lot of suck tonight against La Salle.

The Result:  The Bonnies lost to La Salle tonight at the RC by a score of 66-56. For SBU it was their second straight loss after three straight wins. The Bonnies had a week to prepare for this game but like we’ve seen so many times before the Bonnies dropped a game they shouldn’t have. Let’s hope they go out and win one we don’t expect them to in the near future because the water’s are about to get rough. With the loss the Bonnies fall to 4-4 and 9th place in the A10.

What You Should Know:  The Bonnies opened the game on an eight to nothing run, and did so without the help of Marcus Posley who was benched for the games’ first five minutes (Gregg got the start in his place, Posley was late to practice this morning). SBU seemed to be in cruise control at that point, scoring at will in the paint off some good penetration by the guards. From there however La Salle not only climbed back into the game but took a four point lead on a few occasions, fueled by Jordan Price who had 14 points at the break on 3-8 shooting from deep. La Salle led by a pair at the half, thanks largely in part to their five three pointers (SBU was 2-10 from 3PT). While Dion Wright had a great opening frame (11 points, 5-6 shooting) the first twenty minutes saw the Bonnies take far too many ill advised shots. Posley and Cumberbatch took multiple deep three pointers early in the shot clock and the team was slowly abandoning their strength- getting the ball into the paint. Chris Dees took an 18 foot jumper at the start of a possession. The Bonnies weren’t playing smart basketball on the offensive end.  SBU looked best vs. URI when they got the ball to Dion, the same was true tonight in the first half. If SBU was going to win this game you had the feeling Posley was going to have to get it going (4 points, 2-7 at the half) to give us a boost. This team has shown time and time again that it has a really hard time winning when #3 is not a major factor.  Dion Wright alone isn’t going to beat A10 teams.

The second half didn’t start well for the Bonnies. A few more triples by La Salle (what else is new) and the brown and white were down 39-33 at the under 16 timeout. By the under 12 the Bonnies still trailed by five points due in large part to Jerrell Wright’s nine second half points at that time. Ndoye picked up his third foul early in the half and it sent him to the bench. Chris Deese, in for Ndoye missed several bunnies and was ineffective in containing Wright. Schmidt send Youssou back into the game at the under 12 understanding the mismatch down low. From there things only got worse. La Salle went inside time and time again to Wright and when they grabbed an offensive rebound, they seemed to make it count more often than not. Bonaventure meanwhile, continued their offensive woes. Without Posley doing anything (was 2-11 tonight and did not make a 3PTer, 0-6) the team was stuck in neutral all game long. With seven minutes left in the half SBU was shooting 22%. Posley air balled three three point attempts in the game. At this point I think it’s clear the junior has hit a wall physically. Getting him figured out is the number one priority going forward into this week.

You Knew It Was Over When:  La Salle made a deep three pointer to make it 50-40 with ten minutes left. This was a game where the Bonnies just never seemed in any type of control. The ten point lead at that point seemed too much to overcome given how the game was being played and how absolutely lifeless this team looked.

Wright led the Bonnies in scoring again tonight but it still led to another loss.

The Good: Dion Wright brought his lunch pail for the second straight game and did all he could to push the Bonnies tonight. The Bonnies didn’t do a lot of things right but they did take care of the basketball for a change (5 turnovers). SBU scored in the paint at a nice clip (34).

The Bad:  For the second straight game the Bonnies looked terrible offensively. Aside from Dion Wright, there have been very few bright spots on that end. Guys took some bad shots but the bottom line is when you don’t make shots you look pretty awful.  The team missed a bunch of short looks, Posley looked simply horrible coming off the bench. SBU had no answer whatsoever for La Salle’s interior game at times as Wright punished them, especially in the second half. Chris Dees had a chance to play tonight but failed to make any real contributions when called on. Cleon Roberts and Jordan Price torched the Bonnies to the tune of 44 points and eight three pointers. They also shut down SBU’s guards on the other end. In addition to SBU not shooting the ball, yet another team rolled into the RC and shot it from 3 at a nice clip. Like we said a few weeks ago: this trend isn’t going away anytime soon. This is a wart this team will carry all year.  With Davidson and VCU coming up next the Bonnies find themselves in bad shape as far as the near future is concerned. SBU has those two followed by UMass and a trip to Dayton, then Richmond up next. That’s a TOUGH schedule coming up. Wins are going to be hard to come by and tonight was basically a must win game in this league. Really disappointing. Posley being in the doghouse is obviously not a good thing either.

Foe of the Game:  Cleon Roberts came into the game as one of La Salle’s lesser offense players but tonight he was the Explorer’s best player. Roberts scored 20 points on 6-12 shooting. Price also scored 24 points but was less effective needing 19 shots to do so.

I wasn’t surprised that: La Salle was able to bottle up Marcus Posley for most of the night. I said in the recon that La Salle has the type of guards that would give him issues on the wing and for the second straight game Posley was held in check. Without his shooting/scoring from the perimeter the Bonnies have a nearly impossible time wining. Schmidt needs to get him back on track and quick. There is no way we can beat Davidson without some semblance of shooting the ball.

I was surprised that: Not just that we lost, but how we lost. The Bonnies looked terrible tonight. This was their first home game with the students back in about a month and the team looked flat. La Salle is a “decent” team if we’re being kind about it and they really controlled this game for the last 35 minutes. While nothing is ever assured in the A10, beating La Salle at home is one of the more winable games we’ll play. Now the Bonnies are very much looking at the possibility of a four game losing streak if they can’t steal a win this week.

What’s Up Next:  The Bonnies travel down to North Carolina to take on Davidson (14-5, 5-3). It’s the Bonnies first ever A10 match-up with the Wildcats. Davidson blew a 13 point half time lead on Saturday and lost to St. Joe’s. SBU is now riding a brief two game losing streak.