Marcus Posley was late for shoot-around Saturday morning and essentially didn’t show up to the game against La Salle.

There aren’t many positives to extract from yesterday’s loss to La Salle at home. I expected the Bonnies to win. They were never even really in the game after halftime. They were thoroughly defeated by a fellow middling Atlantic 10 opponent.

Marcus Posley, the league’s leading scorer and Where’s Waldo for the day, showed up late for shoot-around and his punishment was not starting. The Bonnies would have been better without him altogether. The junior scored four points on 2 of 12 from the field.

The Bonnies aren’t going to win very often when Posley isn’t scoring. They are going to lose when he takes so many shots and doesn’t score more.

Posley’s struggles reflected the Bonnies offensive difficulties as a team. They shot 20-59 overall and 2-18 on 3-pointers.

At one point in the second half they missed 11 straight shots. They missed five consecutive shots on one possession. Chris Dees missed three of them from point-blank range.

Dees, by the way, was 1-5 yesterday and 9-31 for the year from the field. Even with Posley coming off the bench, SBU reserves managed just six points.

As for the guards, the trio of Posley, Jaylen Adams, Andell Cumberbatch combined to shoot 5-29 for 14 points. Ugh.

At least Dion showed up

Dion Wright was the Bonnies’ leading scorer for the second game in a row. The junior had 21 points on 8-11 shooting, 5-5 on free throws and also grabbed seven rebounds.

Coming off a 22-point game at Rhode Island, Wright has easily been the most consistent SBU player this season.

Following the loss to URI last weekend, the Olean Times Herald’s J.P. Butler wrote that, under Schmidt, the Bonnies have tended to beat teams under them in the league standings and lose to those on top of them.

So, if you figure, the Bonnies will take of business against the lower end teams in the conference, they will go 4-6 to close the season, finish 8-10 in the A-10 and 15-14 overall.

In other words, a par-for-the-course finish for the Bonnies under Schmidt.

Kyle Alexander in the house

The talented 6-9 recruit from Ontario sat courtside for last night’s game. The student section greeted him with chants of “Alex-ander” and “Come-to-Bonas”.

The Bonnies would be very fortunate to land Alexander, who also has drawn major interest from big conference schools. What St. Bonaventure has going for it is location and the recent success of fellow Canadian Andrew Nicholson.

It has been said that Alexander’s family would like to see him stay close to home. St. Bonaventure’s proximity would be ideal.

This image was posted by @TheDHowSpecial on Friday and retweeted by Alexander on Saturday: 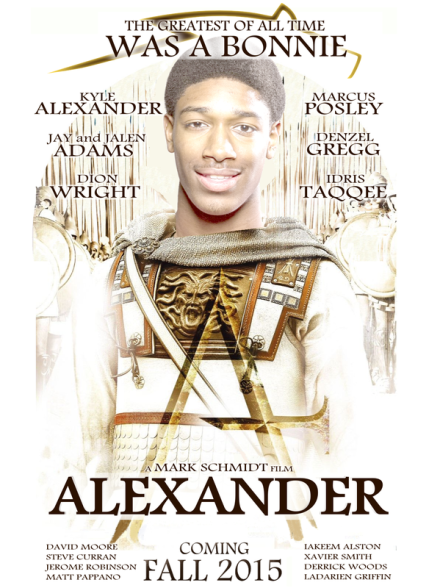