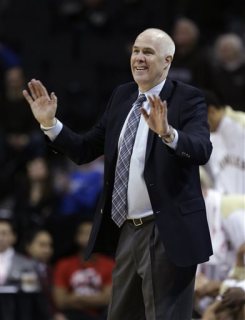 Schmidt has done everything Bonnies fans could have asked for since 2007.

Congratulations are in order for Bonnies’ head coach Mark Schmidt who won his 200th career game down in North Carolina last night. Schmidt is in his eighth season as Bonnies coach and entered 2014-2015 with a record of 106-110 in Olean during that span. The four years prior to Mark taken over the dumpster fire that was the program between 2003-2007, SBU went just 24-88 and a putrid 10-54 in league play. Under Schmidt, SBU has gone 46-66 in the A10 prior to 2014; a vast improvement by any measure. Schmidt is making his way up the Bonnies all time coaches wins list and given that he has a contract through 2019, he should add a bunch more W’s next to his name. Schmidt should be praised for reviving this program starting in 2007 and turning it into one that not only competes every single year in the A10, but does it the right way. Consider the amount off the floor issues Schmidt’s teams have had; almost none. Consider how many impact players transfer out; almost none again. We’ve said it before and we’ll see it again- The Blog support Mark being in Olean long term, he has more than earned it. He’s been as good a hire as anyone could have hoped for in 2007. Here’s to another 200 wins in Olean and hopefully, another A10 Title or two. So crack open a Sam Adams tonight coach while watching some VCU film. Then, let’s crack open a bunch more Saturday night after a big home win.