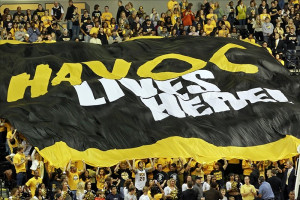 VCU comes to the RC Saturday and provides SBU with their first top 25 test of the season.

Generally we’d compose our always-solid (in our minds anyway) preview and scouting report of the Bonnies upcoming opponent. However, with the blog staff having actual real jobs, and us leaving at the crack of dawn tomorrow to get up to Olean this weekend, we’re going to forgo the VCU Recon post. Hopefully you’ll find a way to go on.

Everyone knows what VCU does…”HAVOC”. They pressure you after made field goals, they thrive on turnovers and are much less of a quality team when you can slow the pace, limit turnovers and make them miss shots (thus not allowing them to set up their press). VCU is now without their star point guard Briante Weber whose career is over after tearing up his knee. In his place JeQuan Lewis starts, and he’s not your average bench player…he’s a capable guard who’d start for nearly ever other A10 team. The Bonnies are coming off their best road win of the season, the RC should be packed (or so we hear) and we hope we’ll be on hand for an upset win. This is a game SBU can win if they can limit turnovers, easy buckets for VCU and defend to a decent degree. We’ve come to know this of SBU: Expect the unexpected. I really don’t know what to expect going into this game. We have a young point guard and so VCU will likely try to make his life Saturday pretty ugly. VCU is deep, talented and well coached. But, the Bonnies beat two top 25 teams last season (UMass and SLU) and playing at home, they’ve certainly got a shot.

So, that’s it for the pregame. We’ll be at the Burton bright and early on Saturday. If you see us (and know what the heck we look like) feel free to say hi and give us some feedback on the blog. We hope to run into a few readers and to share some beers and burgers before the contest.

PS- Post Game Post will likely be out too since we’re hoping to paint the town that night and enjoy our weekend. See you all early next week!