Courtside seats might not last, but barrier will remain 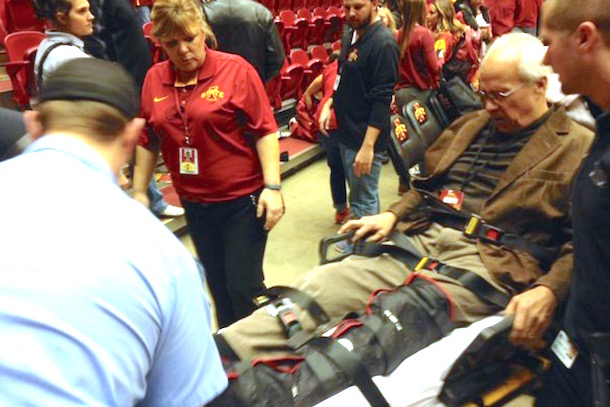 A court-storming at Iowa State this week brought focus back to college basketball court saftey.

I don’t know Tim Kenney. I care that he succeeds only because he is employed by St. Bonaventure.

Let’s make something else clear:

I supported Kenney’s decision to implement courtside seats in front of the student section. I supported him for a few reasons:

One Bona Bandwagon poster fruitlessly has made it his/her life’s cause (or so it seems) to have the seats removed.

The poster, admirably, went so far as to contact the Atlantic 10 to learn its role in Kenny’s courtside seats. Turns out, the conference didn’t force the seats – or any kind of court barrier upon the Reilly Center.

Fair enough. But I believe Kenney when he described court safety as a “point of emphasis” for the Atlantic 10. Safety is a major concern for every conference, at every level of college basketball.

I can also guarantee you it is a major point of emphasis for St. Bonaventure.

I work for a college. Next to ramping up dwindling enrollment, campus safety is easily the greatest interest for administration.

Kenney’s idea may very well fail. But the concept will prevail. The Reilly Center cannot — and will not – return to its previous configuration when students were a mere arm’s reach from the action.

There is just too much at stake for the university.

This week, a court-storming at Iowa State resulted in a broken tibia and fibula for a reporter covering the game. The incident was the latest in a growing line of court-storming conundrums.

There was a melee at Utah Valley and near-melee at Kansas State.

There was the time C.J. Leslie (damn him) saved a classmate in a wheel-chair from being trampled in a furious court storm.

And while no one was hurt, the court storm after the victory over VCU last season was dangerous. Watch the video.

Referee Gene Steratore maneuvers carefully for his life. Students literally climb over reporters seated on the baseline to join the celebration. A security guard ushers a VCU player to safety. Color commentator Ben Howland is afraid for the safety of those involved.

A barrier – any barrier – wouldn’t have prevented the storming. But it would have stalled its momentum. It would have allowed a breif moment for the officials, and VCU players and coaches to reach the fringes of safety.

It may prevent a major incident. It may have save St. Bonaventure from embarrassment and shame – not to mention a possible lawsuit.

St. Bonaventure is especially at risk when students are positioned so closely to the court. The student interaction with the game was unique, but it was also clearly dangerous.

Let the fight continue. Just realize it likely won’t matter. The courtside seats might not last past this season. But some sort of barrier almost certainly will.