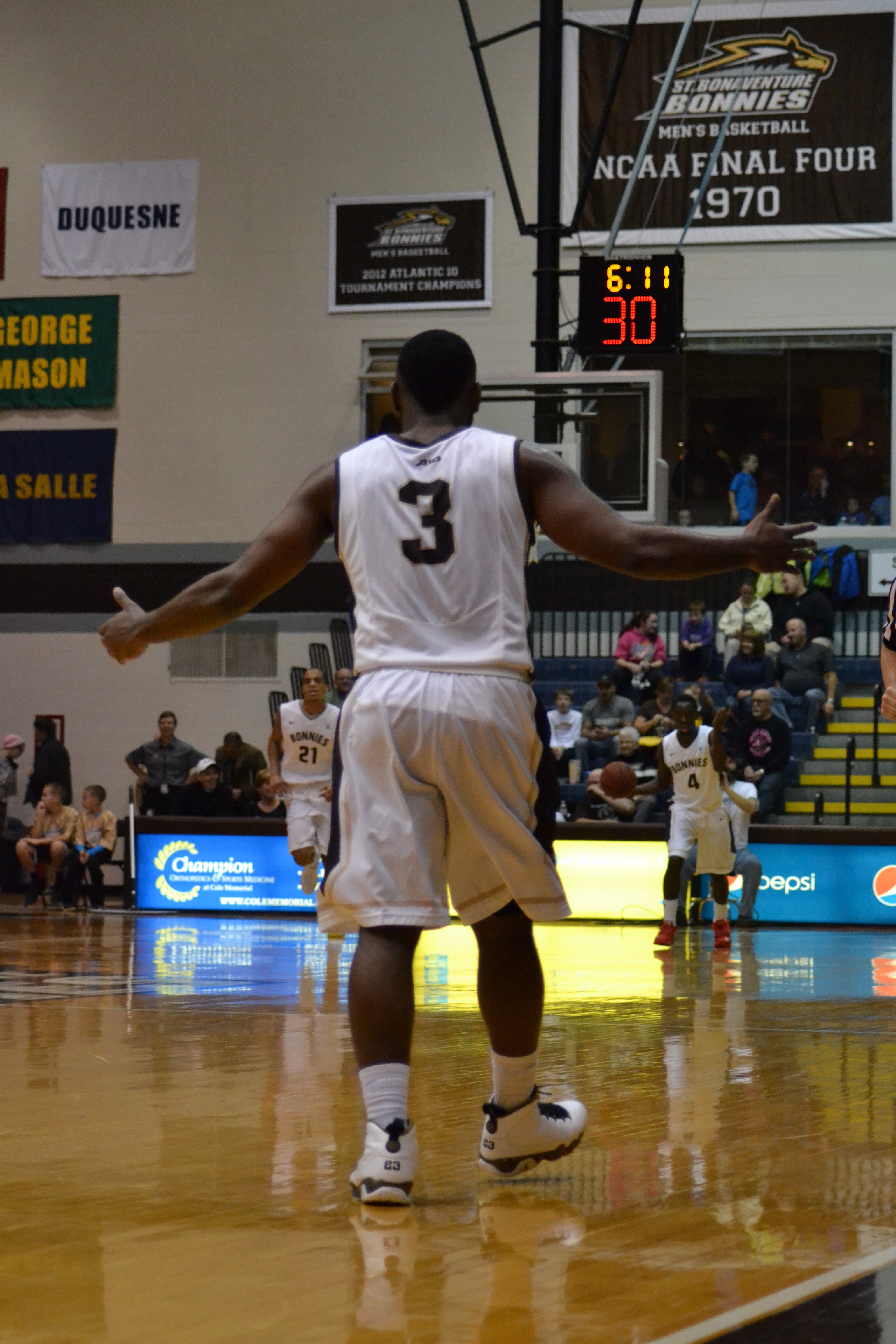 What else could MP3 do for the Bonnies late in the second half? Basically nothing.

The Result: The Bonnies used hot shooting from Jay Adams and some very timely scoring from Marcus Posley in the second half to down Davidson 97-85 to start A10 play. The Bonnies have won two in a row vs. the Wildcats since they joined the league.

The two teams exchanged blows in the opening half that saw a bevy of three pointers from  Adams and some quality interior play from Derrick Woods. SBU was forced to play most of the opening frame without Dion Wright and Marcus Posley who picked up two fouls.

Still, with Adams’ hot hand and some great team basketball on the offensive end, the Bonnies went into the locker room tied at 43. SBU watched Davidson guard Jack Gibbs take 19 first half shots; he scored 15 points. Jay Adams needed ten less attempts to score 17 points. He was just getting started.

As we’ve seen many times in the past, the visiting team came out a bit more ready than the Bonnies in the second frame. Davidson got white-hot shooting from Jordan Watkins who came into the game averaging five points per contest. By the time he was done torching SBU, he had put up 23 points on 6-8 shooting from deep. No one could have seen that coming.

While the game continued to be a back and forth contest with each team failing to separate themselves, one player stepped up inside the final eight minutes and took over: Marcus Posley.

Posley scored 17 second half points, almost all of them inside of the games final few minutes, and did so by shooting just four three pointers. He got himself started by going coast to coast and finishing a crazy lay-in that brought the RC to its feet.

Posley used the aggressive play and attack-the-rim attitude we’ve been calling for on here for weeks to ignite the Bonnies. That, coupled with a six minute or so scoring drought out the other end from Davidson, helped the Bonnies build a somewhat-comfortable lead inside of the last three minutes. Once SBU continued to step to the line and knock down their free throws the game was over. While the final buzzer sounded Adams had set a career high with 30 points on 7-13 shooting and Derrick Woods had done the same scoring 11 points…all in the first half.

This was a great “team” win for the Bonnies. We knew it would be a high scoring game, but whether or not the Bonnies had enough firepower to win it was unknown. Now we know that led by Adams, this team can score in the high 90s if need be. Yes, Davidson is banged up so SBU caught them at the right time, but they are still a top 100 team. And SBU hasn’t beaten any of those this season. This, is their best win.

Also, consider that you haven’t even read the name Dion Wright yet in this article. That’s because Wright played like a human being tonight; he was in foul trouble, scored just 12 points and grabbed five rebounds in 20 minutes. The team survived without Wright for most of the first half and finished Davidson without him in the end. A great sign of growth from this team.Tyson and Woods getting floor time inside of the final media timeout isn’t something you can teach in practice.

If you wanted a peak of what next year would look like, you got it tonight in the first half.

Woods played his best game as a Bonnie in the A10 opener.

The Good: Really lots of good in tonight’s win and there would have been a lot of good even if SBU came up short tonight. Posley finally being aggressive, going to the rim and laying off three pointers was a huge step forward tonight. If he keeps tonight’s second half mentality going forward, watch out. Jay Adams has just been insane over his last six games. There’s nothing else to be said about how well this kid is playing. 5-8 again tonight from three. 11-11 from the line. He’s shooting over 70% from three in their last five….Wow. Woods posted a career high and looked great with the ball in his hands in the first half. Taqqee had five and six including a big offensive board and score late in the game. Tyson had five boards and one huge bucket late in the game. Denzel Gregg was 8-8 from the line and had 13-5-4 tonight…the “good’ Denzel was in full force. Let’s make it two in a row Wednesday…SBU held Jack Gibbs to three second half points; incredibly impressive. In the first half it looked like he may score 35. The Bonnies were +5 on the glass, outscored Davidson 42-26 in the paint, had only eight turnovers, shot 51%, and got 20 bench points. Holding Davidson to 42% from three was good enough given SBU’s incredible 50 plus percent shooting night.

The Bad: Davidson’s offense is about as pretty as it gets. There’s really no team in the A10 that plays the brand of basketball like they do. So, being able to “out-score” the Cats is usually how you win. Tonight SBU did just that. Still, there were runs of play where Davidson scored at will on screens and back-cuts, etc. It will certainly be an “easier” if not different task on Wednesday at Mason. SBU needs to keep Dion and Marcus on the floor, and that means avoiding foul trouble early. Tonight the supporting cast was ready to roll. That may not always be the case. I’d like to see Gregg and Taqqee play a smarter brand of basketball on the offensive end in terms of knowing their role. The two combined to go 1-6 from three, and I just don’t think this offense needs them taking six three pointers a night. They, like Posley, need to continue to be aggressive and drive the ball, and either take their lay-up or stop and pass. “Know your role” and play to your strengths. The fact that these are the issues we’re naming as “bad” items is a great sign. They are more “areas of improvement” as opposed to “things to be really worried about”.

Big Takeaways: The big takeaways from this game are that the team was able to beat a quality club (yes, Davidson was undermanned) without their big three having their best efforts for 40 minutes. They were able to outscore one of the best scoring offenses in the country; and that’s no easy task. They showed some real quality half-time adjustments in regards to stopping Gibbs and Watkins; this ultimately helped them pull away and win. I thought Tyson looked better on the glass and that Woods’ footwork and hands looked the best they ever have. Now, they need to bring all of that on the road to Mason. We knew SBU could beat Davidson, we all did. But it’s great to see them actually do it. Winning at Mason would show a lot of maturity and ability to be ready for the next game without a letdown. Good teams make this a 2-0 start.

What’s Next: The Bonnies hit the road to play George Mason on Wednesday. Mason got thrashed in their A10 opener to VCU on Saturday and are projected to finish in the bottom four of the league, without question. Despite being a road game, this is one the Bonnies have to have.

I believe the Bonnies are 9-3 overall not 8-4. I know it was just an oversight on your part, but it was a huge win and I like to see it in the books.

Yeah, that’s from the screen grab of a site we use. Can’t change it, their error. Thanks for the comment though.

A team win… a lot of credit goes to the bench and our Coaching staff AND the fans !!!

There was a veteran officiating crew at tonights game but WOW some of the calls against both teams were tough.

Homer, without a doubt. The fans were great last night, helped carry the team in the 2nd half. Aside from the team’s inability to defend Davidson’s in-bound plays, the club looked ready, esp. in the second half. And as far as the refs were concerned- totally agree. They really slowed the pace of the game at some points.