The question of retiring numbers

When I wrote a few weeks ago that David Vanterpool deserved consideration for number retirement at the Reilly Center, it was a sentimental folly. I had seen Vanterpool play. His greatest performances are permanently etched in my memory. It was a biased piece of writing lacking context and history. 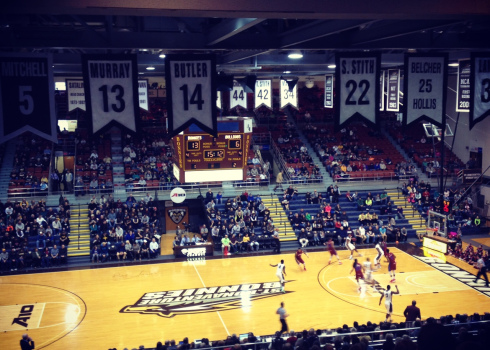 Vanterpool was a very good player. The collective numbers he amassed in points, assists, steals and rebounds won’t be matched anytime soon – if ever. He helped lead the program’s revival in the 1990s. He is a key character in the history of St. Bonaventure.

St. Bonaventure has retired only 10 numbers in its near 100 years of basketball. It is an elite group. It should remain that way.

Is Vanterpool elite? Does he belong?

During and in the aftermath of reporting on and finding Greg Sanders, other legends of the past were brought up to me.

What about Glenn Price? George Carter?

Glenn Hagan (with an assist from his coach, Jim Satalin) made a compelling argument for himself. (More on this later this week.)

Were they elite? Do they belong?

You tell me. I only know them by numbers in a record book.

Athletic director Tim Kenney has taken the right step by planning to convene the hall of fame selection committee to discuss number retirements. Hopefully this will make the selection process more objective than in the past – when the decision was left solely to the AD.

But many great players have passed through St. Bonaventure. How you can possibly honor them all appropriately without making others feel slighted?

“I’d opt for a ring of honor or commensurate going forward,” he said. “I’d put a moratorium on retiring numbers but acknowledge that others support retiring numbers and certainly respect that.”

Kenney brought up a good point in passing before Saturday’s game: What if a star recruit wants to wear No. 44 or 25 or any other of the retired numbers?

Other schools hang banners to honor past players, yet allow their numbers to be worn by others. Sooner or later, St. Bonaventure will have to consider doing the same – or like Engelhardt proposed – something different.