When you woke up this morning you hoped that it would hurt less. That the sting would be gone. That some kind of perspective would have come over you while you tossed and turned in your sleep.

But if you’re like me, this morning feels no better than 7PM did last night. I was up until 3AM thinking only of how this team got wronged.

If you browsed around the internet this morning you likely read how the Bonnies were named one of the biggest NCAA snubs in recent memory. If you didn’t, and enjoy inflicting pain on yourself as you can read just a few of those articles here, and here, and here, and here . Our own commissioner had to come to our defense and call foul on the NCAA selection committee for their disgusting omission of the Bonnies. I enjoyed this but could have done without the first sentence that I thought, took some of the teeth out of her statement.

George Mason coach Dave Paulsen said he was outraged on Twitter and the amount of “I’m sorry, I feel for you” tweets that I got last night made me feel like someone close to me had died. Atlantic 10 fans everywhere were crying foul; even one UMass fan who posted here last night who openly hates everything we stand for said he felt bad…really powerful stuff.

I, like many of you I assume, did not watch a second of any preview show. Hell, I turned the selection show off as soon as I knew the leaked bracket was real.

I did not care to hear about those “snubbed” teams. I’m sure someone stuck up for us, probably Jay Bilas, and took appropriate shots at the completely corrupt selection committee the NCAA as formed, but I was in no mood to hear anyone defend us.

As I stated last night, I don’t give a crap about this year’s NCAA Tournament, nor will I on Thursday and Friday or during the Final Four. As soon as we win the NIT I’m done with college hoops. If we happen to get knocked out early, I can promise you that game is the last one I watch until next season…last night has really made me analyze how I view this sport.

As expect our team and coach said all the right things last night after being left out in the cold. Though Marcus Posley did have some words for the NCAA (good for him) that we all agreed with.

I think this morning the feeling I have, above all else is hopelessness. Last night I went from stunned and speechless to depressed.

This morning I feel hopeless.

Our tiny school, with no budget, in the middle of nowhere, with a bunch of players almost no school in our league would sign went 14-4 in league play and shared the title for the FIRST time in school history. They had a top 30 RPI. They were over .500 vs. top 100 teams. They beat the conference tournament champs twice (neither at home), won at Dayton and ran off 10/11 wins to end the season. They did EVERYTHING right. They could not have played better (yes, they could have won Friday but I’m not going down that road right now) and were still left out.

So trash teams like Tulsa could get in because their former AD is on the committee…Their own point guard said they had no chance! The tweet was deleted but a friend asked point guard Shaq Harrison if they were going dancing and he replied, “naw. We out bro. Lost to Memphis by like 30.” I honestly would not be stunned if there was a money element involved in this Tulsa situation. Zero of 59 bracket projections had them in, and then there they are. I would not be stunned if in a year or two we learn criminal activity took place to get them into the field, FIFA style. This Bonaventure team may literally have been robbed of their chance to play by someone with ties to those in the room because I refuse to believe Tulsa got in from a basketball resume standpoint.

So what will it take to make the NCAA field again? What the hell would this team have to do to make it back as an at-large for the first time since 2000? Because to me, it’s going to be really, really hard to replicate this season. That’s not to say I don’t have confidence in this coach and this team, I believe as much as anyone, but when you review the history of this program- this type season doesn’t come around often. And if our best year ever in league play can’t get us dancing, than what the hell can? The NCAA selection committee would probably tell us off the record to increase enrollment to 38K, get a football program, join the Big 10 and then try for that at-large.

The Bonnies did claim the number one seed in a region for the NIT.

Honestly, at this moment this doesn’t excite me one bit but I’ll surely be ready to cheer on the team from home on Wednesday. I do fear however, that the team is so crushed by being snubbed that they don’t have the fuel to make a deep NIT run.

I certainly hope I am wrong and the team comes out beyond pissed off and plays their tails off, but to me this will be a massive mental test to see where their heads are. Wagner comes into the RC thrilled to be playing in the NIT. If I’m on this team, I am still likely hanging my head about being passed over and thinking that I should be playing Thursday in Brooklyn vs. Iowa instead of tonight vs. Wagner.

SBU would need to win three games to advance to play at MSG on March 31st. The Finals are on April 2nd.

(Note: Students need to buy their own tickets, that sucks, someone with money should pay fort this….They say you can devote time or money to things, I clearly am a time person.)

Here’s our portion of the bracket. We will have more on this game and the NIT tomorrow…do your best not to snap at anyone at work today. 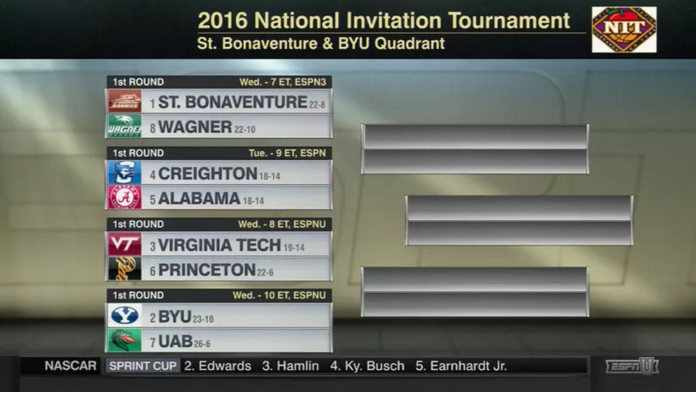 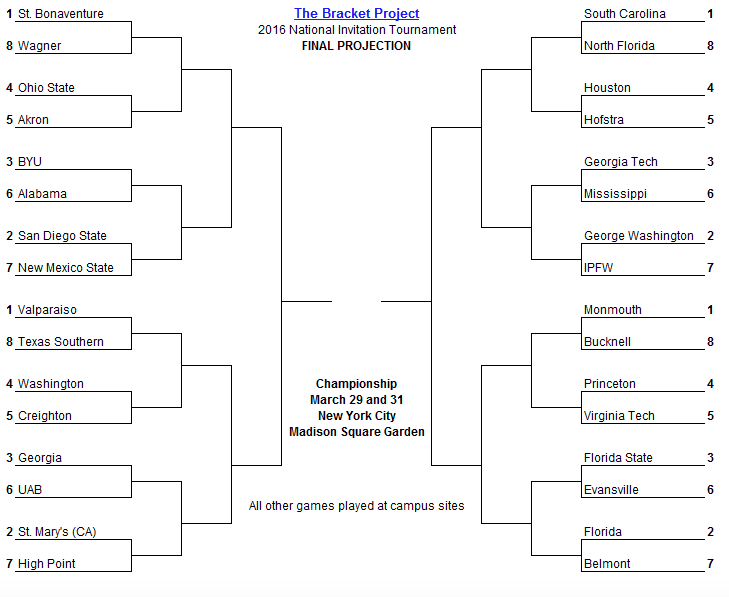