As the 2016-17 season approaches, lets take a quick look at each of the Bonnies non-conference opponents. SBU has quietly put together a sound non-conference schedule that although it lacks star power or high majors, it does see the Bonnies facing off against a number of quality foes who have had recent success. Let’s take a peak into what lies ahead for the Bonnies.

The Red Flash from the Northeast Conference return to the Reilly Center to take on the Bonnies in the opening game of the season for both teams.  The Red Flash finished last season at 13-17 and graduated their three leading scorers.  That senior trio accounted for nearly 39 points out of St. Francis’ average of 70 per game.  Their leading returning scorer is sophomore Isaiah Blackmon who only played in 19 contests in the ’15-’16 campaign.  The Bonnies have not lost a home opener since 2004 and the last six of those wins have been by double digits.  These two teams last met in Olean during the 2011-2012 NCAA Tournament year, and the Bonnies claimed a 24-point victory.  The Bonnies lead the all-time series, 31-12.

The Bonnies will travel to Lakeland, FL to take on the Gators of the Southeastern Conference in “neutral” court battle.  Renovations to Florida’s arena will force the team to take a tour of neutral venues around the state until they can return home to Gainesville at the end of December. This game will be about 2 hours south of Florida’s campus. The Bonnies are 0-1 all-time versus the Gators.  Florida qualified for the NIT last season and made it to the semifinals before falling to George Washington in DC.  They finished their season at 21-15.  The Gators return some key players from that group such as Chris Chiozza and KeVaughn Allen and will be contending for a trip to the NCAA Tournament this season.  Coach Mike White also added a graduate transfer from Charleston, Canyon White, who averaged nearly 20 PPG.  Joe Lunardi has the Gators has a #9 seed in a preseason version of Bracketology.

The first of three straight games in Austin, TX for the Lone Star Showcase begins against Sun Belt Conference foe Arkansas-Little Rock.  Darlings of last year’s NCAA Tournament with a big upset win over Purdue in double overtime put the Trojans on the map. AR-LR put up 30 victories in a season that saw them lose only four games in the regular season by a combined 25 points. The Bonnies do hold a 3-1 series lead over the Trojans, winning two games in an interesting scheduling setup in 2010.  The Bonnies played the Trojans in both Olean and Little Rock in the that season, both of those victories were by 13 points.

Wes Flanagan is the new head man at AR-LR following the departure of Chris Beard to the top job at UNLV.  He was an assistant on last year’s team.  Senior Josh Hagins, the leading scorer and Purdue killer, returns as do nearly all of the offensive weapons. This will prove to be a big test for the Bonnies early in the season away from home.

The Chippewas from the Mid-American Conference are the next test for the Bonnies.  This will be the first match-up between the two schools.  CMU finished last season at 17-16 and qualified for the College Insiders Invitational.  Three of those wins came against two NAIA teams and one Division III team.  The Chippewas return leading guard Braylon Rayson, who averaged just over 16 PPG last season.  They do feature some tall players, notably Milos Cabarkapa, who is listed at 7-1.  However, Milos will be a junior and he has barely played during his first two seasons in Mount Pleasant.

This match-up with the Green Wave of the West Coast Conference will conclude the Bonnies stay in Austin.  This game will be the first between Pepperdine and Bonas.  Pepperdine finished 18-14 last season.  Their two starting forwards graduated, taking with them 27.8 PPG.  Leading scorer and senior shooting guard Lamond Murray Jr returns and the Green Wave add a graduate transfer in Chris Reyes.  He is on his third school and most recently played for Utah.  However, Pepperdine is looking forward to his impact and have had success lately with graduate transfers. Their last one won the Defensive Player of the Year award for the WCC.

The Franciscan Cup will be on the line when these two schools meet.  The Bonnies lead the all-time series 28-10 but are on a three game losing streak after taking the first three games when the series started up again.  The Saints finished 21-13 and qualified for the CBI Tournament. They were 11-point losers on the MAAC’s final day to Iona in a bid to qualify for the NCAA Tournament.  Siena averaged 80 points a game last year and return four of their five leading scorers.  Nico Clareth is a player to watch for the Saints.  The 6-5 sophomore guard from Baltimore had himself quite a rookie season and senior PG Marquis Wright dropped 20 on the Bonnies in Albany.  The Saints did commit 25 turnovers in that game, however, and still managed to grab the victory.

The Bonnies face their second MAC team on the year and Big 4 rival Buffalo at the Reilly Center. The Bulls finished 20-15 last season and made it to the NCAA Tournament before falling to Miami in the first round.  The Bonnies lead the series 8-2.  I recently attended a clinic that UB coach Nate Oats spoke at and he mentioned that Buffalo likes to take on the best teams in order to be the best come MAC time.  The Bulls have a long trip to Alaska and Nebraska before they play the Bonnies and they will be battle tested and potentially road weary.  The Bulls are seeking their third straight MAC championship, a feat that has never been done in their league.

The Bonnies travel to Long Island to face the Pride of Hofstra.  The Joe Mihalich-led squad finished last season 24-10 and narrowly lost its first round NIT game to eventual champion George Washington.  Hofstra took a six-point victory over the Bonnies in the Reilly Center last season.  The Bonnies lead the series 3-1.  Fortunately, Niagara transfers Ameen Tanksley and Juan’ya Green are no longer with the program as they have historically been Bona killers, as has Joe Mihalich.  Hofstra played three, five-year seniors last year and were the favorites to win the Colonial.  Junior Rokas Gustys returns.  The 6-9 forward scored 11 points in Olean last year. Hofstra lost a majority of its scoring to graduation. 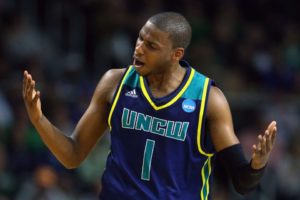 The Seahawks of UNC Wilmington make their way north to the Reilly Center and are the second straight team from the CAA to face the Bonnies.  This is the first match-up between the two schools.  UNC-W finished last season 25-8 and knocked off Hofstra to win the Colonial Athletic Association.  They earned a #13 seed in the NCAA Tournament and lost a close fight to Duke by eight.  The Seahawks led the Blue Devils at the half but were done in by some early foul troubles. UNC-W is the second Bona non-conference opponent in 2016 that Joe Lunardi has predicted for the 2017 NCAA Tournament.  Lunardi has the Seahawks in as a #12 seed.  Their roster has 7 upperclassmen out of 13 players listed.

The Bonnies will take on the Purple Eagles in a neutral court battle at KeyBank Arena in Buffalo. SBU leads the series 87-69 and have won the last five games in the series, dating back to 2010. This winning streak comes after a losing streak that spanned eight years and two head coaches. Niagara finished 7-25 last season and thanks to two close victories over Marist, prevented themselves from sitting in the MAAC basement.  The Bonnies won by 14, which was their second straight double-digit victory.  Coach Chris Casey has struggled in his three seasons on Monteagle Ridge.  He inherited a very young team that was decimated with transfers and other issues upon the departure of Hofstra boss Joe Mihalich.  Casey has won only 22 games since he arrived in Lewiston.  Leading scorer Emile Blackman returns.  He scored 19 points against SBU at the Reilly Center.

The Black Knights of the United States Military Academy venture to Olean to take on the Bonnies in the second to last non-conference game of the 2016-17 season.  The series is tied, 1-1.  Army finished 19-14 last season and lost in the first round of the CIT.  The Black Knights feature a new head coach, Jimmy Allen, who was an assistant on the previous coach’s staff for six seasons. Army loses an amazing nearly 63 points per game due to graduation, as a team, they averaged 77 points.  With a new coach and a new corps of players that need to step up, the Black Knights are a mystery.

The Bonnies close the first part of their season with their old friend, Canisius.  The Bonnies have won the last three match-ups, though the most recent contests have been very close.  SBU leads the series 99-65 and will be chasing win #100, the most against any opponent.  Bonnie Hall of Famer Jim Baron has retired and former UB boss Reggie Witherspoon returns to Western New York to take over the Golden Griffins’ program.  Marcus Posley was the hero at the KAC in Buffalo last year and helped Bona to the victory.  Canisius finished the season 14-19.  Senior Phil Valenti will be counted on to lead the Griffs this season.  He only scored eight points last year against SBU but is their leading returning scorer.  Be on the lookout for Kassius Robertson, as well.  Canisius always plays Bona tough and with a Reilly Center devoid of students for Christmas break, anything could happen.