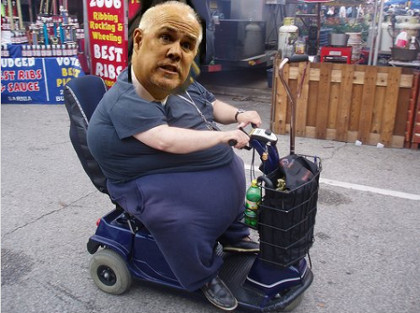 Coach Schmidt might need a Hoveround the next few months after tearing his Achilles.

What a week for the St. Bonaventure basketball program! First, a player transfers out mid-year and the coach – THE COACH – goes down with a “season-ending” injury.

In July of that year, then-SBU coach Anthony Solomon tore his Achilles’ tendon while playing a game of knockout. The Bonnies went on to their worst season ever – a 2-26 nightmare.

Of course, Solomon’s tenure – besides poor play – was also littered with a series of players either transferring in or out of the program.

Let’s hope this isn’t a bad omen for current coach Mark Schmidt, who has had a rough last few days.

First, Jordan Gathers told Schmidt he was leaving the program – a big blow to a team that could have used a savvy senior guard, not to mention a lot more depth.

Then, the day the news of Gathers was released, Schmidt tore his Achilles. Apparently, he’ll be hopping around with a boot and crutches for a while.

At least, the Bonnies ended the week with a 69-51 victory over woeful Binghamton — though SBU only led 35-34 with less than 15 minutes to play before finally pulling away from perhaps the worst Division I program.

Let’s hope for a quick recovery for Schmidt.

Now that he’s slowed down, he won’t be able to nervously pace the sideline at the end of close games. He might have to start gnawing on a towel to quell his anxiety, the way Jerry Tarkanian once did.

He also won’t be able to quickly shuffle down the bench to grab a replacement for Iakeem Alston or Idris Taqqee after one of them screws up.

He won’t be able to run away from reporters after they ask tough questions either. This will be especially difficult in the wake of the many unanswered questions surrounding Gathers’ departure.

To make things easier for Schmidt, maybe something can be arranged where he can sit in between Butler and Pollock on press row and he can walkie-talkie instructions to assistant coach Moore. Boy, wouldn’t that be fun.

Or maybe SBU can equip Schmidt with a Hoveround or Segway. Hell, a simple wheelchair even might work. And of all else fails, Jordan Tyson can always carry the coach from locker room to sideline and back.

We can only hope Schmidt’s injury inspires his troops, that they work hard to win one for the gipper. Certainly, the players will be ecstatic that Schmidt won’t be able to get in their faces as much at practice, though they will have to watch out for flying crutches.

This Christmas, now more than ever, Schmidt is the Tiny Tim of the Atlantic 10, a representative of the league’s impoverished. As the coach likes to say, the Bonnies often go into the machine gun fights of the A-10 with nothing but a butter knife to defend themselves. Maybe I’m exaggerating what I’ve heard.

But Schmidt will get better and so will the Bonnies. Even without Gathers, there is a lot to be optimistic about. The Cap’n Crunch opponents are almost gone, but Schmidt’s club has the ability to compete at the top of a watered-downed Atlantic 10.

… well, as long as none of the Bonnies starters joins Schmidt in the walking wounded compmay.