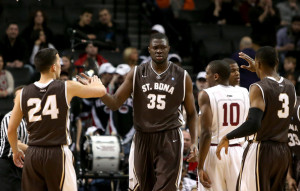 When your team’s best FT shooter is your 7 foot center….

The Result:  The Bonnies snapped a three game losing streak last night, downing the St. Joe’s Hawks in overtime. The win places SBU back at .500 for the year in A10 play at 7-7 and gave them a season sweep of the Hawks. They are now tied for 6th place with four games left to play.

What You Should Know:  In a game that was nip and tuck the entire contest, SBU managed to earn a road win in overtime on the heels of some insanely impressive foul shooting in the bonus frame and late in regulation. Youssou Ndoye was held in check the entire game, not making a single field goal, but connected on 11-12 foul shots,  8 in the extra frame to seal the win. The Bonnies led by one at the break and, paced by Andell Cumberbatch who canned a 3 of 4 three pointers to get the Bonnies offense going. The senior finished the game 4-5 from deep for 15 points, he also chipped in seven rebounds. His defense on A10 POY-caliber wing DeAndre’ Bembry should also be noted. Bembry finished with 15 points but was just 6-16 from the field and 1-4 from deep and turned the ball over six times; tremendous job on defending him. The Bonnies ability to largely take him out of the game left SJU with hardly any other scoring options though Chris Wilson had a decent day (20 points, 4-9 from three). SBU basically said “make anyone else beat us we’ll stop Bembry” and that’s what happened. Isaiah Miles was 3-10, Demery was 3-8 and the SJU bench was 2-10 from the field and turned it over seven times.

Bembry had a chance to win the game with about seven ticks left for the Hawks but missed the front end of a one and one. It looked like Marcus Posley was going to win the game for the Bonnies on yet another buzzer beater but his drive was blocked by Miles in the paint and the game went to overtime. In the extra frame SBU scored the first seven points, all from the line and never looked back outscoring SJU 18-8 in the five minute period. SBU scored just 22 points all of the second half.

Ian Says:  I’m thrilled the team was able to snap their losing streak, beat SJU twice in one year and earn another A10 road win. The team desperately needed a win post-Jay Adams’ injury and this game should help give them confidence that they can finish strong without their starting point guard. Winning on the road while Ndoye made not a single field goal is quite an accomplishment. Credit the Bonnies for holding Bembry in check the entire game and credit Dion Wright (17 points, 10 boards) and Andell largely for this win. Those two kept the team in the game during regulation while Ndoye and Posley struggled all night (Posley was 6-17, 2-9 from deep and had a team high five turnovers). 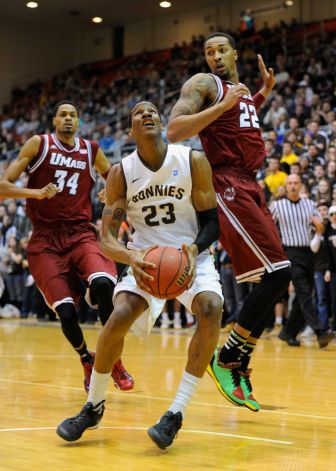 No Bonnie takes more crap from fans than Andell but he was superb on both ends of the floor Saturday night.

Bonnie of the Game: You could either take Ndoye for his ability to basically end the game at the foul line in OT for the Bonnies or take the much maligned Cumberbatch for shooting it exceptionally well from deep, but most importantly for taking Bembry out of this game on the other end. Without their super sophomore scoring in the mid-20’s SJU is a really poor team and the Bonnies proved that last night.

Foe of the Game:  Senior point guard Chris Wilson scored 20 on 7-14 shooting and made 4-9 three pointers. I basically said he stunk in the preview and that if their freshman point guard was any good right now he’d be the bench…he made me look bad. Still, Wilson isn’t very good but he had a game last night and kept SJU within shouting distance while most of his teammates struggled to score. Give him credit.

Good stats: Held SJU to 37% shooting and 26% from deep. Contained Bembry. Forced 20 turnovers and recorded 13 steals (5 via Posley). 20-28 from the line is solid (71%) but the FT’s in overtime were most impressive. Seven bench points feels like a season high. Dion’s ability to score 17 points on nine shots is amazing considering what some other guys need to score that number. Alston also did not have a single turnover, though his two assists weren’t anything to write home about either. 6-16 (37%) from three is a big improvement over our A10 average.

Bad stats: Ndoye and Posley were a combined 6-21 from the field; these two have to be on Wednesday for us to win. They’ve both been very inconsistent of late and with Jay down they need to be better, plain and simple. 17 turnovers is far too many, five were Posley’s doing and Gregg had four in just 25 minutes. Alston was 2-10 from the field and he really needs to take a three pointer once and a while to keep the defense honest; it’s painful watch him be so open from 20 feet and knowing there’s not a chance he will shoot it. I know he’s not a good shooter but it would be great to see the coaching staff let him know he’s got their “ok” to pull it once and a while…have some confidence out there. Hell, if I played last night and had the looks he did I’d pull it from 24 feet that open. At some point he’s got to add that jumper because the defense is just waiting seven feet back for him to drive at them.

I wasn’t surprised that: I wasn’t surprised that this was a very close game late as I knew we’d have a chance if Bembry didn’t take over the game. So there’s that. I was really looking for this team to have that bounce back effort after three losses in a row and we got it. I said earlier in the week this isn’t the time to bail on this team and they proved they’ve got some more wins left in the tank. Beating GW on the road this week won’t be easy but they struggling in a major way and are not some team to be feared at this point. After that game SBU has a chance to finish 3-0 so let’s see where we end up. There are wins left to be had in this season.

I was surprised that: We could win a game on the road when Posley and Ndoye played so poorly and we shot 37% from the field with 17 turnovers. I mean if I told you going in Ndoye won’t make a shot, Posley will be 6-17, you’ll shot under 40% and turn it over 17 times you’d likely say “We’re screwed”. Well, this was one of those games where you find other ways to win and thanks to Dion, Andell, great defense and good FT shooting we got a win. Take it and move on.

Up Next: The Bonnies travel to the Smith Center on Wednesday to take on GW. The Colonials have lost seven of their last eight games and are playing as poorly as any team in the A10 over the last month plus. The Smith Center is a tough place to play and GW is still a more talented team but this is a game the Bonnies can win. They’ll have to get more from their horses (Ndoye/Posley) and probably better than 2-10 shooting from Iakeem…but they can win another road game this week there’s no doubt.

The Bonnies snapped their three-game losing streak and evened their A-10 record at 7-7. The win also moved St. Bonaventure into a tie for sixth place in the Atlantic 10.

After a Marcus Posley drive was stopped by Hawks defense to end regulation, the Bonnies scored the first seven points of overtime to open a 59-52 lead. Saint Joseph’s cut the deficit to 64-60 on a three-pointer by DeAndre Bembry with 33 seconds left, but Youssou Ndoye pushed the lead up to six with two free throws. Dion Wright, who finished with 17 points and 10 rebounds, made four free throws down the stretch to seal the win.

Posley finished with 16 points and five steals. Andell Cumberbatch played perhaps his best game of the season with 15 points and seven rebounds while handling the defensive assignment on Bembry all night.