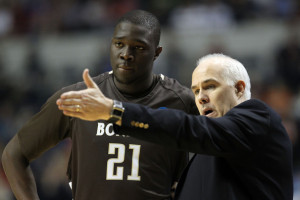 Youssou Ndoye has come a long way since playing a bit role for the Bonnies during their run to the NCAA tournament in 2012.

On Sept. 8, Youssou Ndoye tweeted this:

Time to focus on one goal and one goal only…

One might guess that singular goal to be to lead St. Bonaventure to an Atlantic 10 championship.

The final steps of fulfilling those aspirations begin Thursday against Saint Joseph’s at the Barclays Center in Brooklyn. It’s time again for the Atlantic 10 tournament. If the Bonnies have any chance of winning the title, claiming four victories in four days, their senior big man will have to lead them.

Ndoye hasn’t tweeted since Sept. 8. He’s been too busy with basketball, after all. That’s the focus, now more than ever.

The tweeting can wait till later.

“This is what you practice for. Since during the summer, you just want to get yourself as ready as possible for the tournament,” Ndoye said after he propelled the Bonnies to victory over Fordham on Saturday in the regular season finale.

The seventh seed, the Bonnies aren’t expected to advance deep in Brooklyn. They will have to beat St. Joe’s for the third time this season and then a Dayton team that has already trampled them twice just to reach the semifinal round.

The Atlantic 10 is a conference full of talented upperclassmen that have endured and often conquered the challenges of March. They are guards who can adeptly shoot and pass, wings who can slash to the basket in bursts and versatile forwards who can do damage inside and out.

But none of them is quite like Ndoye, a 7-footer who can run the floor like a gazelle, control the defensive paint with his length and quickness, sweep the glass clean and score effectively enough to demand double teams.

Ndoye gives the Bonnies a chance.

Few would have uttered such a line five years ago when Ndoye was finishing up his second year of organized basketball at prep school in Maine. Ndoye was big and fast, but he was clumsy and raw. Mark Schmidt and the Bonnies took a chance on him when few others were willing to take the risk.

“I tell people all the time, when Youssou decided to come to Bonaventure, some people laughed. It was like, ‘What? You’re taking that guy?’” Schmidt remembered recently. “We just saw something, and he made what we thought a reality with his work ethic. If anybody thought that he would be the player that he is today five years ago when he was up at Lee Academy, no one would have believed it. He was riding snowmobiles.”

Try to imagine a 7-foot African teenager basking in the snow and cold of Maine.

The United States was a foreign terrain to Ndoye when he arrived here from a Dakar, Senegal as a 17-year old. Basketball was essentially new to him, too. He was a soccer player growing up. The sport he plays now was an afterthought.

“When I came here four years ago,” Ndoye said of St. Bonaventure, “I didn’t know anything about this. I was coming here just to get an education. I was just a kid from Africa who happened to play basketball.” 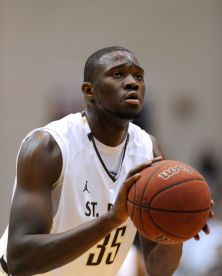 Ndoye has made great strides away from basketball, too.

Ndoye’s game has slowly developed – from a bit reserve on the 2012 Atlantic 10 championship team to a leader the last couple years. With more fine-tuning, he might find a spot on an NBA roster soon.

“Mark and I are good friends. We talked about it. The development of Ndoye has been incredible,” Fordham coach Tom Pecora said. “It’s really, really impressive. I remember seeing him in prep school. That takes a lot of hard work with big guys, but he’s really become an exceptional player.”

“Everyone will look at his offensive development,” Pecora added, “but what I see is his ability to move his feet and defend.”

Case in point: Ndoye, matched up with a quick Fordham guard at the top of the key, quickly moved laterally and back to swat a driving attempt at the rim.

Ndoye has made similar strides away from basketball. He has nearly mastered the English language, and he is confident and articulate in speaking it.

“You listen to him speak … I know I couldn’t speak whatever language he speaks at home,” Schmidt said. “To able to come to the United States with nothing and to become not only the player but the person that he is, it speaks a lot about him, but also speaks about the community we live in and the school. He has come a long in all facets.”

Ndoye has played some of his better games in the Atlantic 10 tournament. He averaged 13 points, seven rebounds and two blocked shots in three games last year. As a freshman, he grabbed a then-career-high nine rebounds and blocked two shots in a quarterfinal win over St. Joe’s.

Thursday could be Ndoye’s last game in a St. Bonaventure uniform. Saturday’s victory over Fordham was likely his last at the Reilly Center. With 22 seconds remaining, Ndoye exited the court with his fellow seniors to a standing ovation. The big man smiled and hugged his coaches and teammates.

“This is really humbling,” he said afterward. “I will never forget this. I will take this everywhere I go. I learned so much stuff just being around my teammates, socially and going to school here.”

Then Ndoye talked about the challenge ahead for the Bonnies. In his mind, perhaps he hearkened back to that tweet on Sept. 8.

The focus is clearer now than it has ever been.