The Bonnies posted their most impressive win of the season on Saturday afternoon as they downed the Ohio Bobcats 81-68 at the Reilly Center to improve to 5-2. In a fast-paced, three-point shooting heavy first half, neither team was ever able to hold much more than a marginal advantage.  But, Marcus Posley beat another buzzer at the half for his first and only three of the evening to give the Bonnies the 37-35 edge heading into the break.  I was slightly worried about this one at the half, with such a small margin and Ohio seemingly getting incredibly easy looks from distance. It seemed the hot-shooting Bobcats would find their way sooner or later.

Coach Schmidt mentioned in his press conference that Simmons was having too easy of a first half for Ohio in terms of looks.  He was able to enter the lane while being guarded by Adams or Posley, and then kick out to open teammates.  Of note, Coach Saul Phillips for the Bobcats pointed out that Simmons is a top-10 free throw shooter in the nation…for whatever reason he got to the line a grand total of zero times…maybe credit the Bonnies’ defense.

The second half was a different story.  After a sluggish beginning to the half that saw Ohio sport a 10-3 run, Bonas took over with the help of a 21-6 run fueled by Adams and Kupato. Turnovers came in bunches for the Bobcats and Jaylen Adams and Nelson Kaputo seemed to be trading threes at the other end pushing the lead.  This in large part came from switching to a 2-3 zone; credit Schmidt for that adjustment. Simmons was no longer able to drive into the paint, making them pass around the perimeter and try to shoot over an outstretched hand.  It was vital to see Jay begin to see his shots go down as this team has been yearning for more production from deep (more on this later).  Also, Kaputo has been mind-blowing, exceeding many’s expectations.  I am beginning to check the starting lineup each game to see if #4 is getting his name called.  This backcourt duo will be loads, I mean loads of fun to watch in the next few seasons. 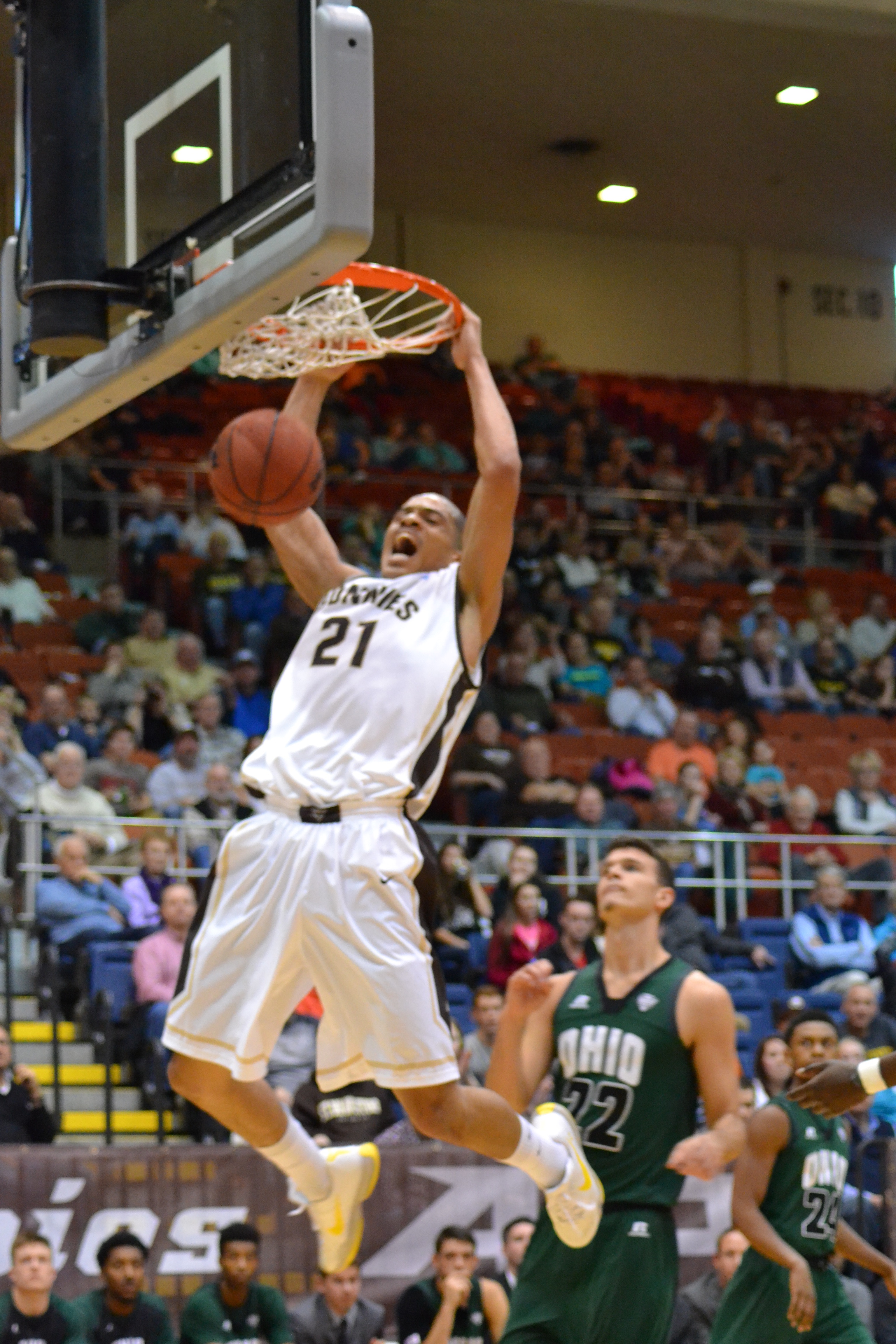 Wright tallied yet another double-double for the Bonnies in the win at home.

The Difference (Team): A few numbers jumped out from a team standpoint.  I was worried about the height that Ohio was bringing into this matchup.  Not only could they potentially shoot the lights out, but at nearly every position we were undersized.  We came out and out-rebound the Bobcats 37-32, and maybe more importantly were the offensive rebounding numbers: winning that margin 13-6.  Both coaches emphasized that number and Schmidt mentioned exactly where I was going with my thoughts: you are usually going to do well if you win the 2nd chance points battle 16-0.  They also both mentioned that height is not the only factor in rebounding.  Hustle and quickness to the ball can come into play as well.  The Brown and White seemed to have a bit more of that tonight. That was excellent to see.

Also, a number that Schmidt has always placed a large emphasis on is the turnover battle. Take care of the ball, you get more shots up and give yourself a better chance to score; possessions are points. Bonas won that battle forcing 13 and giving up 6.  The combo of offensive boards and fewer turnovers turns into 65 total shots for Bonas and 54 for the Bobcats…that helps, people. SBU showed vast improvements in shooting the rock and taking care of the ball compared to their last time out.

The Difference (Player): On the blog, we have been focusing on the backcourt the past few weeks.  They have generally struggled to be efficient, even with some high-scoring nights sprinkled in the mix.  Tonight, Jaylen Adams was able to find his shot from behind the arc and help buoy Bonas in this game until the streak in the second half brought on by Nelson Kaputo.  We have been insisting that one of them was going to need to find this shot, or this team was going to have some trouble in upcoming games.  I like that Adams was able to do it against such a long Ohio team.  There was a lot of creativity needed inside the paint to score at all for Bonas, be it a guard or forward.  The 3-point shooting at least allowed a little more room down low. You want another improvement? hHow about a 6 assist to 2 turnover game as well.  A final stat line of 7-12 (5-7 deep) for 22 points along with 6 assists, 6 boards, and only 2 turnovers.  A “vintage” freshman-like Jaylen Adams stat line that I am sure Coach Schmidt will take night-in and night-out. Check out his game rating below for statistical prof of his fantastic game. Great to see Jay bounce back and carry this team a game after Dion Wright did the same thing.

Fun Fact: Adams’ stat line at Ohio last year - 26 points on 6-7 shooting (12-15 from line) with 5 boards and 2 assists.  Maybe Jaylen just likes seeing black and green jerseys. Schmidt joked after the game to get Ohio in the A10.

What’s Next: The Bonnies will have a bit of a quick turnaround, as they face the Vermont Catamounts (4-5) on Tuesday evening in the Reilly Center.  Out of the America East conference, the Catamounts were trounced earlier today by Yale, 72-54.  For some common opponents, they beat Niagara by 18 and lost to UB by 6.  They are currently averaging 73 a game. SBU has a chance to get to 6-2 before a long layoff. This game is a must-win at home before break.

Sort by:   newest | oldest | most voted
Guest
Joe
Share On TwitterShare On Google

You do not know a GOD DAMN THING about the Bonnies-let alone basketball. Please stop pretending that you are some sort of savant when you cannot even edit your own cunty blog. Eat yourself. You are NOT a journalist with the errors you publish. Idiot. Also, I’ll bet you don’t remember Rashaan Palmer. Idiot.

That’s a lot of hate following a big home win. Cheer up, life’s to short to be angry. Thanks for the unique visit though, stay classy and God Bless.

Thanks for your post game review!!! It seemed to me that Kaputo was the spark ninth second half. Ya gotta like the way Woods is playing. The small lineup with Kaputo, Adams, Posley, Dion and Denzel is working.

You must be doing sum thin right or else Joe wouldn’t be so jealous of your reporting.

Vote Up0Vote Down
Member
Jonathan May
Share On TwitterShare On Google

Homer,
Also agree Kaputo was a nice spark. While Jay did give us a bounce back performance, Schmidt noted in his post game that it was nice to have Nelson chip in with those shots. He also said that we won the rebounding battle and especially on the offensive side which I think is a little bit of a pat on his back bc he is notorious for not letting this team get beat two games in a row in the same fashion. Schmidt is great at stopping the bleeding when something isn’t going well with the program.

Vote Up0Vote Down
Guest
class70
Share On TwitterShare On Google

Good game summary. I like the statistics, but please add a glossary so I know how you calculated eff and usage.
Sorry some readers are giving you heat. You can’t please everyone. Your efforts are appreciated by others.

70, I’ll try to find the website’s “key”. We don’t come up with these ourselves but rather subscribe to a site that does this for all games. That’s a good point though and I’ll dig and see if I can find the calculation method. Generally speaking though, higher the better ha! Jay’s 41% eff. is off the charts good.

Homer, thanks for the words and I fully agree, this team has played best with Adams-Posley-Kaputo-Gregg and Wright on the floor. As the season goes on I believe you will see more and more of this.

Nice recap from someone who the expert Joe declares to have no knowledge of hoops in general or the Bonnie’s in particular. I like your work for what it’s worth. Not sure what Joe’sproblem is, but come on, it’s the Holiday season man, lighten up. What must he be like after a February loss?

Vote Up0Vote Down
Guest
Mike
Share On TwitterShare On Google

Something tells me Joe has some other issues and also it’s not his real name, very random post to get mad at. You have to at least give credit to creative gems like “cunty blog” and “eat yourself”