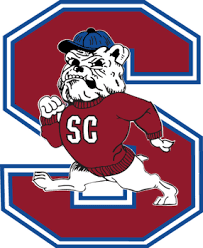 The Opponent: The South Carolina State Bulldogs out of the Mid-Eastern Athletic Conference.  The Bulldogs are 5-6 on the season and are coming off an 83-68 loss at Duquesne on Wednesday.  They are coached by Murray Garvin, who is 27-55 in his three years in Orangeburg. They have alternated wins and losses in their last six games.

Last Time:  This is the first meeting between the two schools.

The Skinny on SCSU:  The Bulldogs were picked to finish eight in the 13-team MEAC in a preseason poll of MEAC coaches and SID’s.  They feature two Preseason All-Conference picks - 2nd team Darryl Palmer (6-8 senior) and 3rd team Greg Mortimer (6-3 junior).  They struggled on the road this week against A-10 rival Duquesne and two of their wins this year have come against NAIA teams; we don’t count those.  They return four starters from last years 11-22 team. KenPom ranks the Bulldogs as the 311st “best” team in the nation, making them statistically (by one man’s measuring system) the worst team SBU will face this season…aside from Niagara at 317.

Dion Wright looks to keep rolling against SCSU this Saturday.

The Path to Victory: SBU will need to deal with the absence of students and the early start time.  These type of games are always tough for the guys to get up for. We may see them come out a little slow and struggle a bit in the beginning, especially with the long lay-off and the end of exam week; remember this team hasn’t played since the 9th.  If Posley, Wright, and Adams put together 40 minutes of strong basketball, this game will never be in doubt in the second half.  SCSU is a middle of the road MEAC team, which doesn’t bode well for them even if one of the Big 3 is off.  SBU has done well at sharing the scoring load if someone is having a rough day but if everyone can play well, this one could be of the blowout variety. Also, watch for the return of Bonnies forward Jordan Tyson has he returns from a hand injury. Tyson has only played one game as a Bonnie despite being midway through his sophomore season. He, like the rest of the club may show signs of rust early on…let’s hope that if they do they can overcome it quickly. Either way, it will be great to add Tyson back to the rotation and have some more depth down low. We can’t wait to see him play his first meaningful minutes.

The Known (their best player): Ed Stephens, Sophomore guard. Stephens is second on the team in scoring at 14.2 points per game and is their most consistent guard. He’s shooting 45% from deep and 44% from the field on the season playing nearly 32 minutes a night. Stephens is coming off an 18 point effort vs. Duquesne where he made 5-7 three point attempts. In a close loss at Kansas State, Stephens scored 24 points, shooting 5-9 from deep. He’s one of those guards SBU will need to locate at all times in the half-court and in transition. When Arkansas State down the Bonnies in the RC, and when MD Eastern Shore did the same it was hot shooting that did the trick. SBU needs to watch the deep ball.

Greg has been a spark-plug off the bench for SBU all season.

The Gut Feeling:  The Bonnies have had success against MEAC opponents in recent years.  This is the type of game that fills out the schedule, gives the Bonnies a win (we hope) and gives SCSU the chance to play a quality mid-major program. However, this is also the kind of game that SBU has dropped in the past. Last season it was Maryland Eastern-Shore at home and Delaware on the road. Two years ago it was Arkansas State. The point is SBU isn’t Duke; they can’t beat teams by just showing up and rolling the balls out. They have to show up, to some degree, and play for 40 minutes. SCSU nearly knocked off Kansas State on the road so they clearly have the ability to knock off a more talented team then them. SBU’s ability to generate their own energy without students will be key in this game. The longer it drags on with the Bulldogs hanging around in a quiet RC the more trouble SBU is in. Still, the Bonnies roll in this one…

Sort by:   newest | oldest | most voted
Guest
Homer Hill
Share On TwitterShare On Google
Ed Stephens, the South Carolina State guard sure played well vs Dukane. They also have a center that was very aggressive. After the stinging lose to Dukane, I’m thinking SCSU will come out with something to prove to themselves. The return of Bonnies forward Jordan Tyson is great! It will be fun to watch how Coach deals with the big men rotation and if Dion returns to his 4 position. Will the Bonnies come out and play man to man or will they press SCSU right from the start and then go into a 1-3-1 defense? Bonnies win a close… Read more »
Vote Up0Vote Down