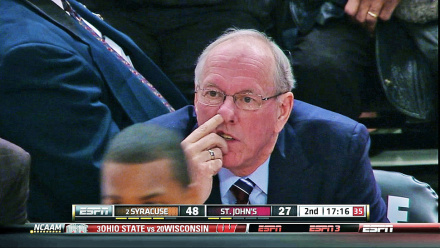 The Bonnies “picked” up two wins over Syracuse and this scumbag today!

The Bonnies didn’t play today, but they may have picked up a couple victories from an old rival.

The Syracuse program was hit by  NCAA with penalties today, including the vacating of more than 100 victories in which ineligible “student-athletes” (ha!) played during the 2004-07 and 2010-12 seasons.

The Bonnies were “defeated” during the 2004-05 and 2006-07 seasons by Syracuse at the Carrier Dome under then-coach Anthony Solomon.

Adding a couple wins to those miserable post-scandal seasons is nice. It’s even better coming from Syracuse and its whiny, scumbag coach.

In a closer game on Dec. 30, 2006, Tyler Relph tallied 19 points and nearly willed the Bonnies to the upset. Freshman Jourdan Morris added 11 points in the first half as the Orange only led 35-34 at intermission. Tyler Benson buried a 3-pointer with under a minute left to make it 75-70 before Syracuse pulled away for the “loss.” 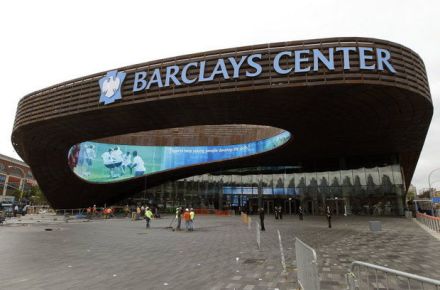 The Bonnies will be the seventh or eighth seed in Brooklyn. You care about this but Jay-Z doesn’t.

What should the Bonnies be hoping for on Saturday? Let’s try to sort things out.

The Bonnies will either be the seventh seed or the eighth seed in the Atlantic 10 tournament and face either La Salle or Saint Joseph’s. At least we know this much.

The Bonnies finish seventh if:

The Bonnie finish eighth if:

To me this is the most likely scenario:

The Bonnies win and GW loses on Saturday. SBU is slotted seventh and will face La Salle at 6:30 Thursday night in Brooklyn.

That is all and well, except for one thing: if the Bonnies defeat La Salle, Dayton is likely looming as SBU’s quarterfinal round opponent. That’s not good.

If the Bonnies end up in eighth, they will likely meet Saint Joseph’s at noon Thursday. A win in that game would mean a quarterfinal matchup against Davidson (the Wildcats earn the top seed by winning at Duquesne in the regular season finale). This is better.

Whether the Bonnies play St. Joe’s or La Salle, it will essentially be a pick ’em game in Vegas. The Bonnies topped the Hawks twice, but both games were battles to the end. La Salle won handily in Olean but the Explorers’ A-10 record shows they’re not as good as they played that night.

Dayton, of course, pounded SBU twice. The Bonnies nipped Davidson at the buzzer on the road. I don’t see the Bonnies beating Dayton on a neutral floor. I give them a chance against Davidson.

In other words, the seventh or eighth seed doesn’t really matter in the opening round. Where it does matter is in the quarters.

If Dayton happens to take the first seed, I’m all for finishing seventh. Otherwise, I’m just fine with eighth.

Convince me otherwise in the comments section below.

SBU can beat Fordham for win number 17 this weekend. That would cap a pretty solid year for Schmidt’s bunch all things considered.

The Opponent:  The 9-19 and 4-13 Fordham Rams. The game is the Bonnies final regular season contest of the season before the A10 tournament in Brooklyn. SBU can earn as high as a 7 seed in the tournament should they beat Fordam and GW falls to UMass. If not, the Bonnies will be in the  8 vs. 9 game which tips first on Thursday. Their potential opponent is not yet known. Playing in the 8/9 game gives the winner the one seed on Friday so avoiding that contest would be very nice…especially with Dayton/Davidson playing so well right now. I’d love to avoid the Flyers but would take my chances with the Wildcats.

The Rundown on Fordham: Fordham is actually not playing horrible basketball right now. Yes, they are coming off back to back blowout losses but the Rams have won three of their last six games making them relatively hot…by Fordham standards anyway. After dropping an obscene nine A10 games in a row Fordham won three of four including wins over SLU, St. Joe’s and Mason. Their best win came against La Salle, a 63-48 drubbing. Fordham sports both the 201st ranked offense AND defense in the nation; so they are balanced at least. The Rams are led by two freshman in Eric Paschall (likely ROY) and Christian Sengfelder. Junior Mandell Thomas is a solid player and former freshman phenom Jon Severe is basically an afterthought now. Fordham knocked the Bonnies out of the 2013 tournament by winning in the RC on Senior Day and I have worries about this contest for that reason. If the Bonnies come out flat Fordham can win this game, they are not the same team as they were two months ago. However, if SBU plays a “solid-enough” game they will win their 17th game capping a really solid season considering the roster/losses.

News: Eric Paschall is listed as doubtful for Saturday’s game. He did not play in their last game against Duquesne. His absence would be a huge advantage for SBU.

Their Strength: If Fordham has a real strength it would have to be their interior game on both sides of the ball. The Rams have gotten better on the interior this year thanks in large part to freshman Sengfelder and Rhomes. The Rams are a solid rebounding team and rank 90th nationally in offensive boards and 70th in keeping their foes off the glass. Fordham also ranks 169th in scoring on 2PT shots vs. just 278th from 3PT. The Rams have played better of late as we stated above and shot FT’s at nearly a 72% clip which is very solid. Fordham can bang down low a bit and so Ndoye could have another rough game.

Their glaring weaknesses: Fordham’s 22% turnover rate ranks 331st nationally so that is a major issue for the Rams. Winning basketball games in the A10 is hard enough as it is but winning them when you’re giving the ball away one out of every 5+ trips down the floor is nearly impossible. Add in the fact that Fordham shots it 29% (323 nationally) from three and generally don’t know how to win/close out games and you have a team with four league wins. If SBU can force the Rams into their normal turnover figures, play their usual solid defense and shoot it at a normal clip the Bonnies should win this home game with relative ease.

Their best player(s): You’d have to go with freshman wing/forward Eric Pashcall at 6-6 combo type of player. Paschall burst onto the scene this year in the Bronx and scored the ball at an effective clip…unlike teammate Jon Severe who put up gaudy scoring numbers but shot a putrid percentage. Paschall shoots the ball 31% from deep, 48% from two and 81% from the line. Those are excellent numbers for anyone, let alone a freshman in the A10. He takes a massive 30% of Fordham’s shot so expect him to shoot it early and often…but for him to make a solid percentage of those shots.

Reason to be Pessimistic:  SBU seems to play down to their competition this season, especially at home this year. Consider the loss to UMess for example. As we noted before Fordham came into the RC on a Senior day in 2013 and spoiled the Bonnies season knocking them out of the conference tournament. Furthermore, I generally look at this year’s Bonnies team as one that lacks real consistency. Should SBU win this game they’d win three straight games they “should” have won…which is hard to imagine given the loss of Jay Adams. But, may the brown and white are ready to turn a corner. If anything I just fear the Bonnies come out flat in this game and lack energy…..hopefully that won’t be an issue as this is the last game in the RC for Andell,Youssou and Chris.

Reason to be Optimistic: Because at the end of the day this is Fordham. The Rams have been the league’s worst team or two for a long time. The Bonnies are more talented, are playing at home in front of what should be a nice RC crowd AND are playing for seeding in the A10 tournament. It would be great to get to that 7 seed with a win and GW loss. The Bonnies have looked better these last two games with Posley at the one and maybe the team is locked in right now and ready to make a run in NYC. Cumberbatch is playing better basketball of late and fresham Idris Taqqee has given the team a rare spark off the bench too. SBU didn’t need to play great ball at all to win Wednesday night and the same will likely be true this weekend. If SBU plays B- basketball they will win this game. They need to turn Fordham over, play solid defense and just score at a normal clip. Do those things and SBU should have win number 17 against just 12 losses…which would make for a very nice season, especially considering we never got Gathers back and we lost Jay for a significant period. If this team could win Saturday and steal a win next week you may call this Schmidt’s best coaching effort to date….

Prediction: There is no repeat of 2013. This team knows they’ve got something to play for get their third win in a row. Let me take another 15+ point game from Cumberbatch and Posley and hope that Ndoye gets back on track. Bonnies win 73-61.