According to a source Jay Adams could be back for Brooklyn.

According to former Bonnie and now sportscaster Shannon Shepherd, freshman guard Jay Adams is recovering well from finger surgery and should be back for the A10 tournament in Brooklyn. I didn’t reach out to her but I assume she has a solid source if she was willing to tweet this earlier this evening:

So much for out for season? Hearing screw being removed & Jaylen Adams will be back for A10 tourney #bonnies

Let’s hope both Shannon and her sources are correct in their reporting. Mark Schmidt has moved on from starting back-up point guard Iakeem Alston at the one and most recently played Marcus Posley at the position on Saturday.  SBU had great success with a lineup of Posley, Cumberbatch, Gregg, Wright and Ndoye. Schmidt is clearly understanding the Bonnies need for outside shooting to space the floor, something Alston just cannot bring to the table at this time. Adams was shooting 32% from three, good for third on the team at this point in time. His A/TO ratio was tops in the A10. Having Jay back in the fold gives SBU a backcourt with three capable shooters and one very steady primary ball handler; something they’ve missed greatly. With Cumberbatch and Posley hopefully finding their stroke this past weekend, it would be great to add another shooter to the mix heading into Brooklyn. As much as everyone wanted Alston to succeed at the point the results just weren’t there from an individual or team perspective. The Bonnies armed with a healthy-enough Adams can win a few games in Brooklyn given the match-ups…there’s not a doubt in my mind. Without him though, I’m much less optimistic.

Adams has not played for SBU since the UMass loss back on February the 11th. In his absence the team has gone 2-3. Let’s keep our fingers crossed that Adam’s finger is fully healed. 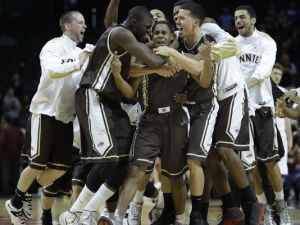 The Opponent:  The 11-18  and 3-13 St. Louis Billikens. The Billikens were back to back A10 Regular Season Champs but lost a ton of talent and haven’t been able to find their way this season. St. Louis is by almost all advanced metric accounts, the league’s worst team. There are no easy road wins in a league as competitive as the Atlantic 10 but winning at St. Louis is about as easy as a road game gets this season. SBU must be ready to capitalize on a weak team and improve their seeding in Brooklyn. If the Bonnies can win their last two games they’d have a great shot to move up to the seven seed and would then play in the night-cap; something very important to those trying to travel to NYC for the game. The 8/9 night (last year) is at noon. Also, finishing in the dead middle of the league would feel pretty good given our bottom half predicted order of finish and loss of Jay Adams a few weeks ago. (Not to mention Gathers never came back which was a really big loss in hindsight).

The Rundown on St. Louis: I’m not going to mince my words here at the fear of “jinxing” the Bonnies because I’ve already explained I don’t believe in that crap: SLU is a really bad team. Jim Crew’s young club ranks 300th in offensive efficiency and 218th in defensive efficiency. SLU ranks 322nd in scoring offense (60.6) 334th in rebounding, 253rd in FG percentage (42%), 303rd in blocks per game and 282nd in steals per game. Their turnover rate of 22% is 328th worst in the nation and their effective field goal percentage of 47.2% is 248th. They send their opponents to the line on 45% of trips down the floor, 317th worst in the country. There really aren’t enough words in this preview to display just how bad SLU has been this year. Everyone knew they’d take a massive step back this season but they’ve actually been worse then most expected. They no longer play great lock-down defense and slug out wins in the 50s. SLU has just one win in their last seven games; a home victory over La Salle on the 22nd of February. They just lost at home to lowly George Mason by 28 points….yes, 28 points at home to Mason. This is a must win road game for the Bonnies given SLU’s current state. If they play like they did this weekend this game shouldn’t have anyone biting their nails with three minutes left.

Their Strength: Really the only thing SLU does well is get to the foul line. The Billikens manage to get to the stripe on 43.7% of their trips down the floor, good enough for 33rd in the country. Their ability to get to the line is huge because they are such a poor shooting team aside from those free shots from 15 feet. However, despite getting to the line a ton they stink at actually converting those shots as they shoot it 65.4% from the line-good enough for 299th best in college basketball. SLU ranks 235th from deep, 233rd from two. They also have the fifth most used bench in the country (basically the total opposite of SBU) but that’s only because they’re super young and not very good.

Their glaring weaknesses: Man this year’s SLU team has so many, most of which I pointed out in the rundown section via stats. To go with just one general overarching weakness I’d just call out their offense. SLU’s 60 points a game, 22% turnover rate and 248th ranked effective field goal percentage make it really tough to win games unless they play out-of-their-mind defense…which they usually don’t because this isn’t 2013. SLU got by on mediocre offenses two and three years ago because they had legit top 20 defenses. Those days are gone. SLU has a below average (but not pitiful) defense and a horrible offense right now. If SBU can get this game into the high 60’s/low 70’s they’ll have to feel really good about their chances. If the Bonnies get a hot Posley/Cumberbatch again (from my mouth to God’s ears) I can’t see SLU keeping up on the other end of the floor.

Their best player(s): In a year where almost nothing has gone right for SLU the play of freshman forward/wing Milik Yarbrough has been a pleasant development. The versatile “big man” scores 10.6 points a game, grabs 5 rebounds and shoots a quality 49% from the field. He’s not a good shooter from deep (21%) but shows signs of becoming a better shooter in the future. His 57% from the line is really holding him back from upping his scoring figures. SLU has a balanced offense, but Yarbrough is the only Billiken who scores over ten a game…crazy. He’s a player who can burn you a bit as demonstrated by his seven 15+ point games.

Reason to be Pessimistic:  Winning on the road is never easy and sometimes games where you really expect a win come back to bite you. This is that game. The easiest road game of the A10 season for the Bonnies could turn out to be a brutal road loss should SBU not come out to play. How many times have you had a great feeling about a game only to be let down by some soul-crushing loss you couldn’t envision? Listen, SBU is not some team that would steamroll SLU 10 times out of 10 BUT this is game you expect them to win, road game or not.  The Bonnies have played better on the road then at home this year though so we can file that one under a…..

Reason to be Optimistic: From a pure basketball standpoint this is a game the Bonnies should win. They have better players at every single position on the floor and are simply a better team. I highly doubt SLU will have an answer for Dion/Youssou if they stay on the floor and if we get 70% of Saturday’s Posley/Cumberbatch duo I think the Bonnies will be just fine. To me, the only way the Bonnies lose this game is if they get just pure garbage efforts from 3/5 starters and nothing from the bench. I think Schmidt’s decision to move Posley to the one is a good one (though I was against it at first) and I’d like to see Taqqee get more burn tomorrow night again as well. Simply put: If SBU plays to their capabilities (see Saturday) this is a game they will win without having to get a big stop inside the final few minutes. However, if we get the GW version of this team they’ll surely lose….and so it goes…let’s hope for the “Good Bonnies” tomorrow night.