Courtside barrier was coming whether we liked it or not 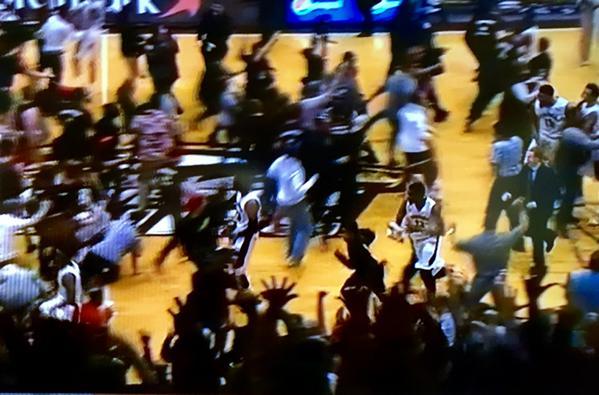 It is completely understandable for St. Bonaventure students, alums and fans alike to be angered by the courtside seats coming next season. We don’t like it because it goes against our tradition and the game advantage we have built over the years in the Reilly Center.

We don’t like it because an outsider AD new to the job is perceived to have unilaterally made the decision to place and sell cushy seats in front of the student section.

The reality is something needed to be done to help ensure court safety at the Reilly Center. Tim Kenney, in an online chat yesterday, described court control as a “point of emphasis” in Atlantic 10 meetings and throughout college basketball.

If you’re reading this, you probably witnessed the court storming following the victory over VCU last season. It was sudden. It was explosive. It was dangerous. If you watched the broadcast, you may remember color analyst Ben Howland implying the same, saying “someone could get hurt out there.”

But no one was injured. Opposing players walked back to their locker room discreetly. All was well.

But change was coming whether Tim Kenney was AD or not.

St. Bonaventure fans will contend the “point of emphasis” on court control is collusion among A-10 members against the little brother of the league to curtail the Reilly Center advantage. That may be the case, but safety is also a real concern. It is everywhere in college basketball.

Wise St. Bonaventure alums that have gone on to success in the real world are smart enough to understand the importance of preventing problems before they happen.

A fellow student or child could have been trampled during the VCU court storm. A frustrated player from the opposing side could cold cock a mouthy, liquored-up student. Placing exuberant students so close to the action opens St. Bonaventure up to any number of potential problems.

So, instead of caging in the students, the new AD and his administration have used the situation to make money. Bravo! The school and the athletic department sure need it.

Q: What’s the difference between a table – like the ones that separate rabid Duke students from the floor – and a chair with someone in it?

A: A few thousand dollars the athletic department can put to good use.

The patrons who purchase seats in front of the student section might not enjoy them breathing down their neck for 40 minutes. But being SBU fans/supporters, we can assume – or at least hope – they know what they’re getting into. We can also hope members of the SBU administration explain to them the pros – and especially the cons – of sitting courtside.

As students, alums and fans, we have a couple choices: 1) continue to sulk and criticize a decision that won’t be overturned, or 2) unite to ensure that the Reilly Center remains the most difficult place for opponents in the A-10, regardless of seating configuration.

You make the call.