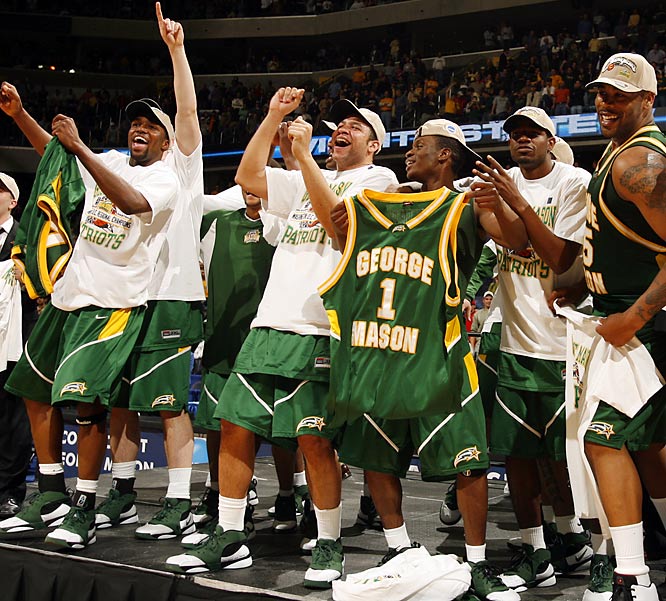 The 2006 Mason team provided some of the all-time March Madness Memories. Tremendous Story.

Whenever possible I prefer to do a Q and A preview with another team’s blog/blogger as I find it’s best to get the recon straight from those folks who watch the team most. We did it with Dayton, we’ve done it again here with Alan Kelly who contributes to www.Masonhoops.com. We’ve exchanged emails and questions…his answers about the Patriots are below. The Bonnies are looking to get to 2-2 in the league after being dismantled by Dayton and Richmond on back to back outings. This game is being played in Rochester, largely due to the fact that the students are still away on their seemingly never ending winter break.

1. Mason started out rough (2-6) but has seemed to improve of late (4-3) to a degree. What’s caused the moderate turn around?

The first five games of the season were a trainwreck for Mason, and the team was probably lucky to be 1-4 and not 0-5. Starting with the win over Manhattan on Jalen Jenkins’ 75-foot buzzer beater and close losses to ODU and UNI (both fringe Top 25 teams), the Patriots began to run a much more consistent offense, led by Marquise Moore at the point, and were rewarded by winning 4 out of the next 5. I think the light also went on for Shevon Thompson offensively around that time.

There are at least three factors that seem to correlate to the team’s success or failure this season. First, offensive consistency is key. The Patriots need balanced scoring, and they can’t afford to have long scoring droughts. Early in the year, it was Patrick Holloway or bust. Success came when Moore, Thompson, Isaiah Jackson, and others started to post significant point totals of their own. Second, the Patriots have to make their free throws. They can’t afford to give away free points. Third, they need to bring a high defensive intensity for something close to a full game. There have been a number of games this season where the team has played one half of great defense, but been lackadaisical and sloppy in the other half.

In the last two games, losses on the road at Richmond and at home to UMass, those old problems have come back again. The Patriots went cold over the last 9 minutes of the first half against Richmond and for about 10 minutes spanning halftime against UMass.

2. Mason lost talent off a bad team last year, but is this team better than that team?

That’s a loaded question. Last year’s team really wasn’t nearly as bad at their record, they were just a collection of somewhat misfit pieces that absolutely couldn’t figure out how to close out a win. Whether that was coaching or players (or, most likely, both), it’s hard to judge how bad last year’s team truly was. Were they a 20 loss team at heart, or were they really, horribly unlucky?

Also, last year’s team was very backcourt oriented, while this year’s edition is frontcourt-focused. On paper this year’s team doesn’t have the star power that we saw last season, but they seem to be playing better team ball for the most part, and succeeding as a result. They still have a lot of the same flaws as last season, especially in consistency from game to game.

3. How can Mason win Wednesday night vs. the Bonnies? What do they need to do well?

Score, and score often. It sounds so simple, but they can’t keep expecting to climb back from double-digit deficits to win basketball games. If the Bonnies go on a run and get hot from three, the Patriots can’t get rattled. They need to stick to their offense and score enough to keep the game within striking distance. Forcing up bad shots just because your opponent made it look easy is a recipe for disaster.

4. Where can SBU expose Mason and beat them?

One of the best ways to beat Mason is to keep the ball moving in the half court. The Patriots frequently have trouble rotating on defense, especially on the perimeter, and they can be slow to reset after collapsing into the paint and/or double-teaming in the post. Hewitt likes to switch on all screens, and this leads to terrible mismatches which don’t get corrected quickly enough. They are also vulnerable to a full court press, if executed properly and skillfully. I doubt either of these weaknesses is a secret as they have been true for pretty much all of Hewitt’s Mason teams.

5. Mason is a horrid shooting team, but Bonas has a habit of getting teams hot…You think GMU will come out shooting?

Mason actually has the same characteristic, ironically enough. I would like to think that Mason will remember their homecoming loss to the Bonnies a season ago, and come out hot, with something to prove. But this team defies all predictions, good or bad. So I guess we’ll have to wait and see what happens.

6. Shevon Thompson has been a Godsend for you this season. Tell us about his game.

He’s one of the best college rebounders I’ve ever seen, but he’s still raw around the edges, especially offensively. He’s only been playing basketball for about five years, since he was a junior in high school in his native Jamaica, and outgrew track and soccer. As a junior college transfer, he’s come a long, long way in the last year or so. Coach Hewitt and his staff thought they were getting a redshirt candidate, not an all-conference performer. He’s exceeded every expectation and will only get better with more experience. 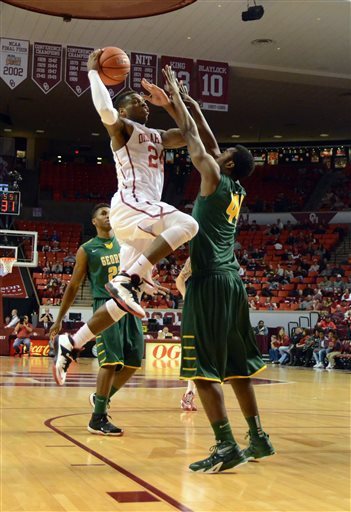 Thompson will likely give Ndoye further fits inside on Wednesday.

He’s creative with his shots, and isn’t afraid to throw the ball off the backboard to himself if he doesn’t have an angle to the basket. He’s even shown a midrange jumper a few times, but I’m not sure that’s something the coaches really want to see. He does struggle in a few areas, such as keeping his feet planted to avoid traveling, and finishing through contact, but that’s to be expected with someone of his experience level. If he can become a better finisher, he will be almost unstoppable.

Defensively, he does a really good job of staying out of foul trouble, although sometimes he gives up an easy basket where maybe it would have been better to just give the foul. He had a career high 5 blocked shots on Sunday against UMass.

Paul Hewitt says he’s the only player he’s ever seen take a ball after practice every day and just throw it off the backboard repeatedly to practice his rebounding. All that practice has paid off, as Thompson continues to rank in the top five nationally in total rebounds and offensive rebounds. He helps negate Mason’s shooting woes by giving us five extra opportunities on offensive boards every single game.

7. Could you provide one sentence scouting on each starter for us?

PG Marquise Moore: The sophomore point guard has had an up and down season and isn’t much of a jump shooter, but when he’s on his game, he’s a good passer who will also drive the lane at will and pick up lots of free throws.

SG Isaiah Jackson: The second-biggest surprise on the team behind Thompson, Jackson is a 6-6 freshman guard who can handle the point if needed, score from anywhere on the floor, and has shown instincts and basketball IQ that belie his inexperience.

SF Vaughn Gray: Once a highly-regarded freshman with a sweet shot, Gray continues to be a disappointment offensively (4.1 ppg on a career-low 33.3 FG%) but the senior provides Hewitt with what he likes best: another 6-6 athlete who can create size mismatches.

PF Jalen Jenkins: An A-10 all-rookie selection a year ago, Jenkins has had an inconsistent season so far, with foul trouble limiting his playing time, but he’s very athletic for his size, can help handle the ball, and is a streaky scorer.

C Shevon Thompson: A double-double machine with what our radio crew has dubbed go-go-gadget arms — arms that just appear above traffic and grab everything.

8. Does Hewitt get fired after the season?

The recent pattern of improvement has lessened the chances of this happening, but unless the last two games were an aberration and the Patriots get on a serious roll, I still think the answer is likely going to end up being yes. His teams have been making the same mistakes for 4 years, even though the entire roster has turned over in that time. It’s unfortunate, because the man has been everything a school could ask for off the court, but I expect new Athletic Director Brad Edwards to be aggressive about winning.

9. Your prediction for the game?

The Patriots of the last two seasons have always done just enough to keep hope alive. Coming in on a two-game losing streak, I think they win this one, 71-68.