If my opinion mattered, Quinlan would be at top of AD candidate list 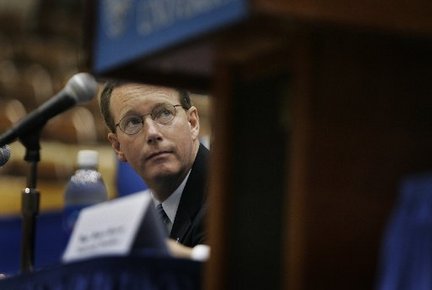 Joe Quinlan, is an Allegany native who served as assistant AD at St. Bonaventure in the early ’90s.

Are you interested in becoming the next athletic director at St. Bonaventure? Then apply here.

It is apparently still a wide open race to select Steve Watson’s successor. But, you can’t have the job if you don’t put your hat in the ring. Certainly, there are enough armchair point guards among St. Bonaventure alumni and supporters to fill Sharon Burke’s inbox in less time than it takes a shot clock to expire.

I won’t pretend to know who the search committee has zeroed in on. I assume this is one of those “national” searches that could net someone for whom we have never heard.

It also might be someone who used to live right down the street.

I don’t know if Joe Quinlan has any interest in returning to St. Bonaventure, but the Allegany native would be one of my first calls if I was heading up the search committee.

Watson and Weise were successful. They had ties to St. Bonaventure and the community. So too does Quinlan, who was an assistant AD at SBU from 1992-94.

Quinlan has been the AD at Saint Peter’s since 2011. He stepped down from the same position at Seton Hall in 2010, shortly after firing coach Bobby Gonzalez.

Quinlan’s time at Seton Hall wasn’t exactly smooth. He also fired Louis Orr and the Gonzalez era was a mess. Quinlan certainly was handed some of the blame for that.

It’s important that the next AD has good rapport with Mark Schmidt, especially, and Jim Crowley. One would expect that Quinlan learned from the high-profile mistakes at Seton Hall.

What I like about Quinlan is how he has worked his way to the top from humble beginnings, much like the blue collar Schmidt and Crowley. Quinlan started as a sports information director at Loyola, Md. and made stops at Seton Hall (twice), SBU, the NCAA and Rutgers along the way.

Quinlan, like Watson and Weise, also fully understands the tradition, culture and how the wheels turn at St. Bonaventure.

So, Joe, if you’re reading, please use the link at the top to apply.