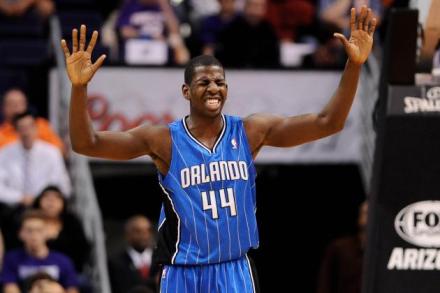 Nicholson may as well be surrendering to playing in Orlando because it’s been a nightmare for #44.

With the NBA trade deadline coming up and the Orlando Magic finally firing the NBA’s answer to Anthony Solomon in Jacque Vaughn, AND so many Bonnies fans wondering about the future of #44 I felt inclined to put my blogger hat on and go get some answers. I am a man of the people, here to serve.

So I did just that. I reached out to one Philip Rossman-Reich- the premier blogger for OrlandoMagicdaily.com to have him give us a real, FAIR and UNBIASED look at Andrew Nicholson’s career thus far and what may lie ahead for him in the future. We all knocked Vaughn (and rightfully so) but once and while I did think to myself, “Maybe Drew just isn’t that good?” But, like anyone whose about to have a medical procedure done, I did the wise thing and got a second opinion.

His answers are below….the long and short of it: Nicholson’s future looks bleak, and he should hope to God he gets traded somewhere (which we kinda figured, my fingers are crossed for a deal to the 76ers).

1.Trade deadline is fast approaching. Do you think AN gets traded? If not, what is his short and long term future with the team? Do you think the Magic are shopping him or does he have no value at this point?

Andrew Nicholson’s trade value is very difficult to gauge. There is no other way to put it. There are probably those in the organization that believe he can still be a good player in this league. His offensive game is still something that can be valued and he continues to develop as a stretch-4 with his 3-point shooting. But he simply has not played enough for any other team to get a good sense of what his worth might be. Or meet the Magic’s asking price.

If the Magic could get something for Nicholson, I am sure they would. But they’re probably value him a bit more than other teams right now. So the asking price is high. He is kind of stuck where he is at for the moment. He just has to scratch out some playing time and make the most of his opportunity when it comes.

2. It seemed like the Magic’s GM was pretty high on AN when he drafted him (obviously). Did Vaughn not care of his game as much or did both sour on him?

I think the Magic are still pretty high on Nicholson and still believe he can deliver something. His post game is a unique skill in the modern NBA and he has shown he can step out and hit the 3-pointer. Offensively, he can hang in the league. His defense is where he still needs work.

Ultimately, that is why he could not get playing time. Jacque Vaughn just never quite trusted him defensively. And then his offensive game seemed to sour. He lost faith in his post game as Vaughn had him playing more of the stretch-4 role as a shooter almost exclusively. It was disappointing to see Vaughn use him this way as it shot his confidence. When you watched Nicholson play for Canada, he showed all the skills that made him a NBA player, a solid post game and a jumper to keep defenses honest.

Vaughn was not the right coach for him at the end of the day. He was not the right coach for the entire team. While key players showed plenty of progress and got plenty of run, Nicholson was pigeon-holed into a role he ultimately could not fulfill. Vaughn failed, like he had with a lot of players on the court, to put them in their best positions to succeed. Since Nicholson’s rookie year, he was trying to fit a round peg into a square hole.

This guy is a clown. Anyone who watched the Magic for five minutes starting in 2012 knew Vaugn was the NBA’s answer to Anthony Solomon.

3. The magic are loaded at the PF. if Drew was traded/released/ etc. do you think he could catch on with a team less deep at the four given what you’ve seen or are you with them in thinking he’s an NBA scrub?

I think Nicholson will get a second look somewhere in the NBA. His post skills are too good and his talent is too intriguing. He may have to start at the end of the bench somewhere and work his way up. He will have to prove himself yet again. And likely on a small contract.

Of course, the Magic could hire a new coach and find the way to use him correctly. Orlando does not really have a clear direction right now and so the team is not in any position to discard a potential asset. The Magic picked up his option for next year, so he will have a chance to show himself to a new coaching staff.

4. Ultimately, why hasn’t AN succeeded in the NBA as a top 20 draft pick?

Nicholson ultimately has lost playing time because he struggles on the defensive end. The Magic have this problem of having a lot of slow big men that struggle to rotate and cannot protect the rim. Unlike Channing Frye or Nikola Vucevic, Nicholson has not been able to hide his defensive shortcomings with his offense.

Nicholson’s confidence on the floor just cratered after his rookie season and as he got moved farther and farther away from the basket. Whoever has him has to find a way to rebuild his confidence in meaningful minutes. That might mean accepting a D-League stint or playing elsewhere to regain that confidence. The FIBA/international game seems to fit Nicholson a lot better. His future might end up being there.

5. Have you heard anything negative about AN off the floor? Anything else that could be contributing to his lack of playtime?

There really is nothing negative about Andrew Nicholson out there. Part of it is the minutes squeeze at power forward that you mentioned. Channing Frye starts and Tobias Harris, Kyle O’Quinn and Aaron Gordon all platoon at that spot. O’Quinn has produced and plays solid defense and so he has beaten out Nicholson for those minutes.

The only thing that can be said about Nicholson, perhaps, is that he is too smart for his own good. Paul Shirley noted this in his book “Can I Keep My Jersey?” Guys who are really intellectually smart (Shirley was an engineering major at Iowa State) often play less on instinct and need time to think and analyze rather than just doing. They also tend to question what is going on a bit more.

I am not saying Andrew has done any of this. But he certainly doe snot have the speed or athleticism to afford to do it. So if he is, it does not help. The NBA is a much faster, much more physical game than college. You need more than YMCA moves.

Nicholson clearly has the talent. It is just about finding the right situation. The situation with Jacque Vaughn was simply not working. He cannot deliver what was being asked of him. Maybe the question needed to change.

6. If you had to guess what AN’s NBA future holds say 18 months from now what would you guess?

The Magic are sure to make plenty of moves this offseason. They want to get to the Playoffs in 2016. That means Nicholson, who is under contract and could become a restricted free agent after next season, could very well be in play as a throw in to a trade. In 18 months when Nicholson hits free agency for the first time, I suspect he will be playing for a different team, having been traded to help the Magic acquire some other asset.

Hopefully that situation and that coach proves to be a better fit for Nicholson than it has been in Orlando.