By the time 9 p.m. had rolled around, Shane had fallen asleep at the table, a half-eaten beef on weck sitting in front of him. The waitresses at the Beef & Barrel had hatched a plan to sing Happy Birthday as a fun way to rouse Shane from his slumber.

It was not anybody’s birthday on Saturday, but a full-on celebration had been underway for hours.

By the time 9 p.m. had rolled around, we were exhausted from the St. Bonaventure basketball experience – from Burton burgers, to booze, to the Rathskeller, a drink with Mark at the Village Green, and one the most thrilling victories at the Reilly Center in recent years.

From high above the court, halfway up the upper deck, Ian sprinted from his seat to rush the floor alongside the frenzied student body. He was there in time to pat the sweaty back of the day’s hero. Marcus Posley had done it again.

Long after the game was over, we were still in the Reilly Center, still soaking up an excitement in the arena that had yet to wilt – even after 5,000 happy fans had filed out of the old building an hour before.

We partied with a mob of ’80s grads in the Skeller, separated by a generation but bound by a common tie – basketball – the ultimate unifier at our small school.

Even Brendan, a Fordham grad who made the 10-hour roundtrip with Shane and Ian, rejoiced as if his team, his school had toppled a nationally-ranked foe on a last-second shot.

I predicted back in October that the Bonnies would take down VCU. Ian claimed the night before game day that Denzel Gregg would come up big off the bench. But nobody could have foreseen Marcus Posley sinking an opponent at the last possible moment for the second time in four days.

Even Posley’s coach couldn’t believe it.

“I told the guys after the Davidson game, I don’t know if it could get better,” Mark Schmidt said in the post-game press conference. “But today it got better.

Somehow, some way, it got better.

By the time 7 p.m. rolled around, Mark was drinking with alums and townsfolk at Milo’s Village Green. The coach happily chatted and took photos with the bar-goers. He never stopped smiling.

We heard that students had planned on burning a couch in Allegany to get the party started that night. These kinds of things happen when you win a game like the Bonnies did on Saturday.

By the time 9 p.m. had rolled around, Shane – his eyes shut and his chin pressed tightly against his neck – might have been dreaming about how this day could have been any better.

He was wrapped in bliss until the first notes of Happy Birthday were belted out. He awakened to a world maybe none of us could have dreamed up. 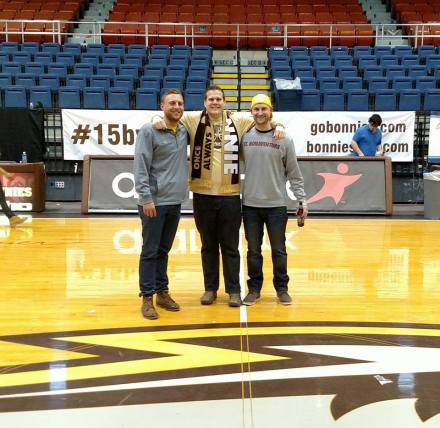