The following post was written by our friend Brendan who joined us this weekend in Olean for the VCU game. He is not contributor to the blog (yet anyway), or a Bonaventure alum but asked if he could share his experience with our readers on the way back to NYC Sunday morning. I told him to have it at. His words are below…I think you’ll find he captured the spirit and energy of Bonaventure quite well. He certainly had a “good journey”.  Please leave some comments and let us know how you feel Brendan captured a weekend in the enchanted mountains.

I took a vacation this weekend to step away from the cold, wet, dark winter of Manhattan and dive into the warm, basking-glow of St. Bonaventure University (and even colder weather). The majority of my friends and work colleagues couldn’t quite fathom why I was burning a sacred vacation day in February to go to scenic Olean, New York, but for the better part of four-years I’ve been listening to Shane and Ian sing the praises of “Bonas” and curiosity had gotten the better of me. Five hours into the trek to the grey-clouded, snowy Southern Tier of New York State, I wasn’t quite sure if there really was a “Bonas”, but my fears were soon alleviated as we were “wheels-down” in Olean and standing in the Reilly Center; dropping off a sixer of “Bhastan Lagah” for Coach Schmidt’s 200th victory.  Ian and Shane roamed the campus, exchanging pleasantries with the staff and students as if they had never left. They were home; I was ready to ride the coat-tails.

Once the weekend had fully kicked-off and Vinny had joined the party, it was time for the legendary “beef on ‘weck” at the Beef and Barrel. As tender, salty slabs of meat accelerate my march towards a clogged artery, and make the ultimate sacrifice down my gullet, there was a quiet energy filling the town as students and alumni were cautiously optimistic about their date with VCU the following afternoon. Strangers united by a common-thread exchanged ideas and thoughts about how the Bonnies would need to execute on Saturday  in order to pull the upset, the injury report, and hope that it was a beginning towards another run at the Atlantic10 title. Following a quick run to borrow some beer money from the fine people of the Seneca Reservation Gaming Authority, we joined the students and alumni as they poured into “The Other Place”. It was a scene out of Cheers as old friends reunited and new well-wishers were christened (myself included). As much fun as the scene was, we were sure to remind ourselves to throttle-down, for tomorrow was what mattered. 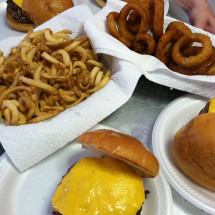 Burger Burgers and Fries hit the spot Saturday morning at 11:15. Being the first ones through the door helped get our food faster than ever before.

Morning had finally arrived and The Burton Bar had three Irish degenerates ready for VIP bottle service and a cheeseburger complete with buttered bun. If you aren’t first…you’re last…

Back to the Reilly Center, I anxiously watched the clock on the scoreboard to countdown to zero. A few cocktails in the Hall of Fame room and a hug from Sister Margaret later; it was finally time. Planted in seat fit for Marcus Aurelius, the once empty arena had filled, as the 5,100+ fans gave it their all before the ball had even been tipped. 35+ minutes of action later, the Bonnies had put themselves in prime position for the upset; the four of us were cautiously optimistic and started creeping towards the court. When VCU hit the shot to tie the game, I couldn’t help but feel as though I had jinxed the entire SBU family. The rest they say, is history. Posley saved the Bonnies again, and six seconds later we found ourselves deep in a sea of students, surrounding the heroes of the day. I had never been in a position to storm the court before, but I was thankful for the moment….it was as if my own team had won the national championship. Strangers high-fived, fist-bumps were given, and the tone for the trip was set. It was easily one of the most exciting games I had seen in quite some time.

Fans extended the moment in the Rathskeller, looking back fondly on their time at SBU, and remembering what it is to be a Bonnie; to be the underdog who keeps fighting and doesn’t give-up, to look forward, never-back. Coach Schmidt echoed these sentiments at Milo’s over a celebratory beer with friends and family alike. Our night ended as the weekend started, at the Beef and Barrel, where, as Vinny alluded to, Shane spent his last moments of energy.

The Thursday night before we left, Shane sent a text; “I feel like a kid on Christmas Eve”. Ian seconded the notion. I didn’t quite understand how it could possibly compare, but after my experience this weekend the reference is fully comprehended. My trip to Bonaventure was my first, and certainly not my last. See you next year Olean. 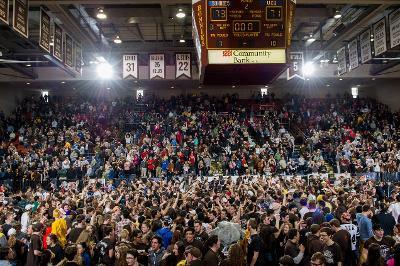 I’ve been to probably over 65 games at the RC since 2004. Saturday’s was without a doubt the best one of them all.